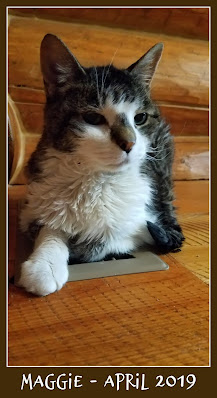 Setting: A family of four considers adopting kittens, but is overwhelmed with pity for a pair of cats that have been languishing at the shelter for over 6 months.  They wait in a small room for the cats to be brought in.

MOTHER: Won't it be nice to give these poor cats a home?

DAUGHTER: That gray cat is so pretty.

SON: Can we go look at the tarantulas?

FATHER: I just want a cat that will sit on my lap.

Members of staff cradled the cats as they entered the space, placing them both on the floor.  The gray cat (Josie) was skittish, even when the young girl sat on the floor.  The black and white cat?  Maggie promptly jumped on Father's lap and began to purr.  Within a half hour, the family was on the way home with two new members.  Little did they know the joy, laughter and companionship that lay ahead for the next 15 years, as Maggie purred and kneaded her way into all of their hearts.  This is her story, which ended this week on September 21. 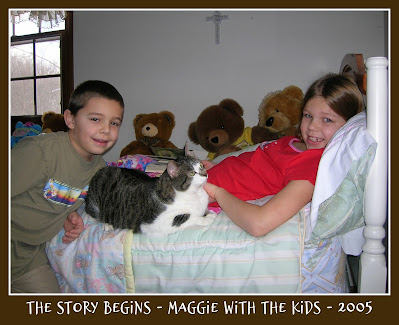 Maggie quickly established herself as the dominant cat, not just with Josie, but with everyone in the house.  No lap was immune from her attentions.  Over time, her reputation as a lap cat became legendary among family and friends who were frequent visitors.  "If you don't want her to sit on you, don't sit down!"  became our constant refrain.  #1 Daughter captured Maggie's character well in her memorial FaceBook post: 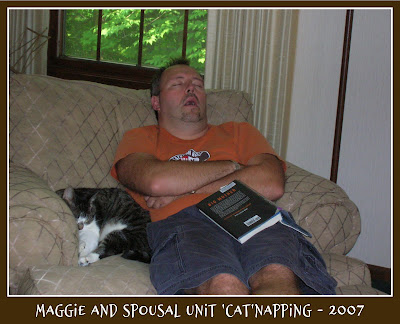 Maggie was our lap cat, our climb-up-and-snuggle cat.  We always used to say "I have a cat", meaning someone needed to get something for us because we didn't want to move the cat off our lap.

One of my earliest memories of Maggie was her attempt at licking my long hair.  I think she thought I was a fellow cat that needed grooming? 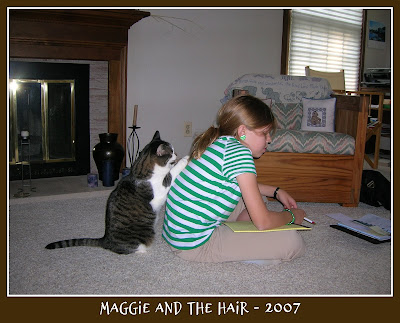 Maggie loved soft blankets and couches and sun spots.  She was the older of our two cats and definitely thought she was queen bee (she was). 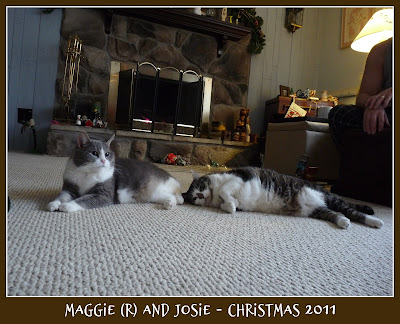 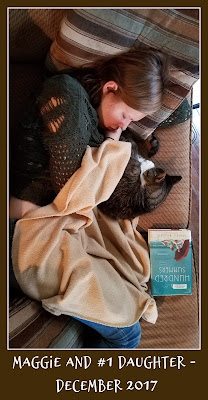 Give our love to Josie.  I miss you already, Maggie Cat.  Hope there are plenty of comfy places to nap in heaven.

In the oddest of coincidences, Maggie died a year and one day after Josie (see Josie's post here).  Despite being two years older than Josie, Maggie persisted through weight loss and arthritic hips.  But I am getting ahead of myself.

In the early years, Maggie was, shall we say, well-proportioned.  Spousal Unit gave her the nickname "Bagpuss", a polite reference to her rotund form.  Looking back at the photos, it is shocking to see the stark difference in her size and the luxuriousness of her fur.  At the time we adopted her, she was 4 years old. 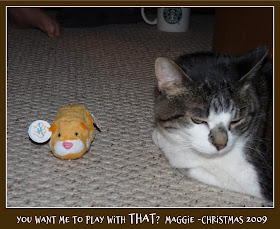 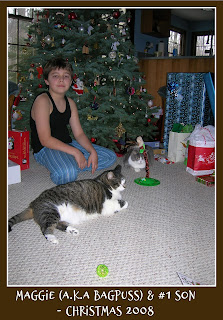 She was not an active, playful cat, and eventually the vet advised a weight-loss plan.  I remember moving the food dish and litter box from the main level laundry room to the basement; in a matter of months, navigating the stairs brought her to a more desirable weight.   Life was busy back then; I travelled often for work and Spousal Unit had his hands full with managing the house and two kids in school.  We also did not have cameras in our phones, always at our fingertips!  Most of the photos are from Christmas, when we could pause for breath.  For 2013 and 2014, I could not find any pictures of our dear cat. 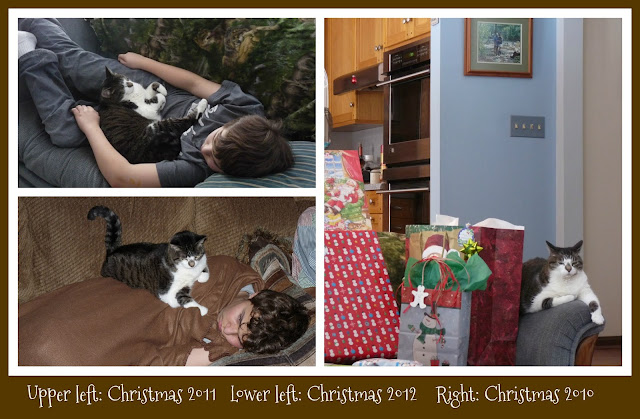 For most of her time with us, Maggie definitely preferred the lap of Spousal Unit.  She would sit on anyone, but if his lap was free, off she went.  So, this is a rare picture with her on my lap in 2015.  Rare because I am not in motion, and rarer still that she is with me.  I love this picture. 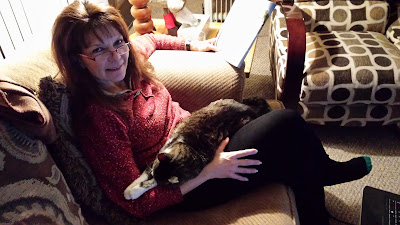 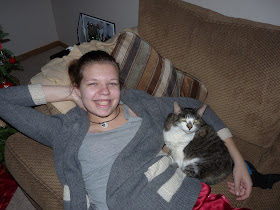 In 2016, life began to change dramatically for the family.  #1 Daughter was already in college, and #1 Son made us empty nesters that fall.  We downsized and moved from Cleveland, Ohio to Troy, Ohio, an interim step before my planned retirement in 2017.  Neither of the cats liked to be in the car, least of all Maggie.  She might have run off if she had known that the four-hour drive was a drop in the bucket compared to the journey to come.  In the meantime, we celebrated one Christmas in Troy; this is the only photo I have of Maggie from that time frame.
On April 27, 2017, we began our epic journey from Ohio to Montana.  Spousal Unit had the parakeet in his car, and Maggie and Josie accompanied me in the 4Runner.  I can't tell you how many meows I heard over those nine days; all of us were relieved to get to the hotel each night. 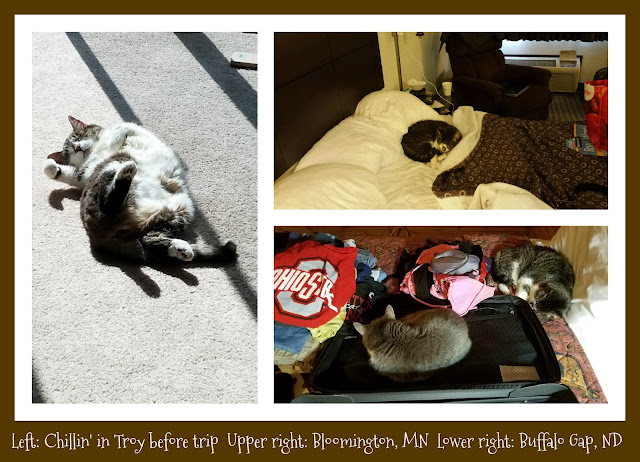 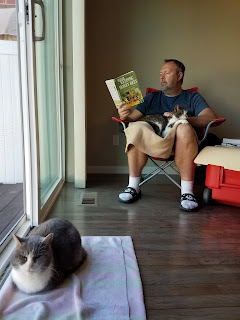 Without any furniture, we made do with camp chairs our first night in Whitefish, Montana.  It didn't matter to Maggie; she was going to seek comfort in that lap no matter what! We soon settled into new routines; #1 Son stayed with us that summer, and several family members came to visit the townhouse and see our log home under construction.  Maggie even played with some yarn I was using to make a prayer shawl.    Both of our children came for Christmas and we made sure to get a picture with all four 'kids'. 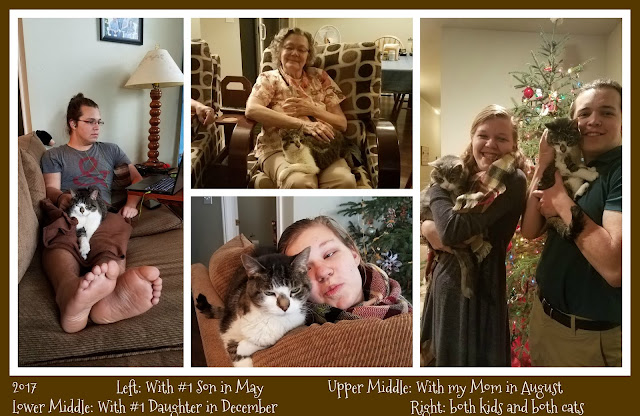 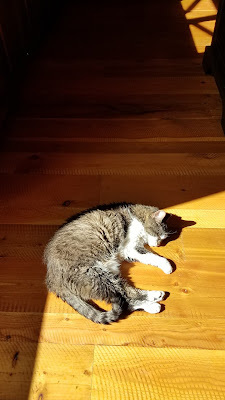 The calendar spun to 2018, which proved to be a hectic year.  The log house was finished and we moved in on April 14.  We hosted my in-laws in the new house, and also traveled to the UK for three weeks.  Maggie took readily to her surroundings; sleeping in the sun spots alternated with sleeping on the air vents.  We could imagine that the warmth helped soothe her increasingly old bones; she turned 17 that year.  (As you can see in the mosaic below, Maggie would often extend one paw and put it possessively on one part of your body.  Little did she know she owned every part of us.  It was also after our arrival in Montana that Maggie and Josie started to share Spousal Unit's lap.) 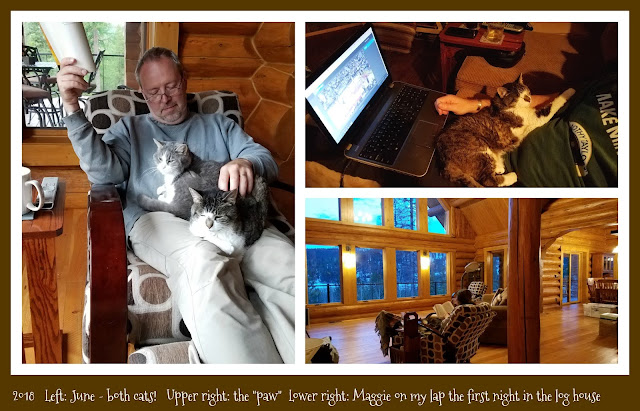 With the arrival of 2019, Josie began to have health issues, and we started to keep a closer eye on both of the cats.  Maggie continued to monopolize the sun puddles and the air vents, and she was losing weight, but she kept on ticking.  With the loss of Josie in September that year, we wondered about the impact on Maggie.  After all, they had been together for at least 15 years.  Maggie seemed to pick up Josie's role as the vocal one.  Frequently, she would sit outside our bedroom door and meow, especially if she had decided we were late for breakfast.  It also seemed, after Josie, that Maggie became firmly attached to one spot on the left end of the couch.  Everyone knew that was Maggie's "spot". 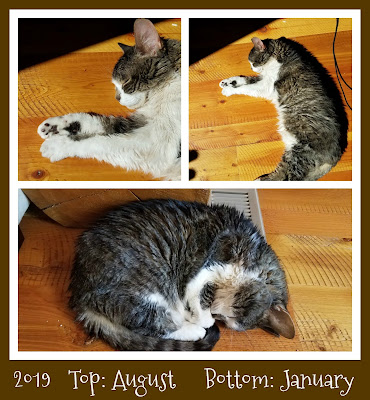 Another endearing aspect of Maggie's character related to food.  It always seemed that she was afraid to eat unless we were in the vicinity.  Without fail, when we would return home from a morning in town or another excursion, she would greet us at the door and then immediately start eating.  Even now, five days after her passing, I am still looking for her when I come through that door! 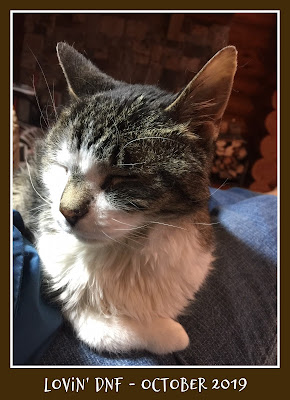 Over the years, we have been very fortunate to have good friends and neighbors to look after the cats when we were traveling or camping or otherwise engaged.  You know who you are!  A special shout out to my Dear Neighbor Friend, who would take the time to sit with Maggie and give her that one-on-one attention that she craved so much.  This was especially important to me after we lost Josie.  Thank you, DNF.  I know you had a special place in her heart!
And so we entered 2020.  Will any of us forget this year?  Maybe some of us would like to!!!  As one month passed to the next, Maggie got creakier and skinnier.  In parallel, she grew seemingly more desperate for attention.  Even in the middle of the day, she would circle my chair at the dining room table, rubbing my legs and meowing.  I would take pity on her and lift her up. 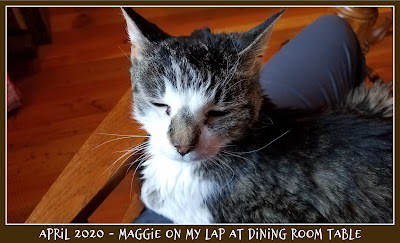 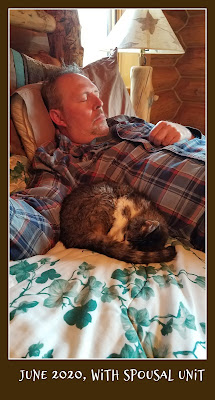 Maggie was not allowed in areas with carpet, so our master bedroom was off limits.  But at times my heart was breaking with her meowing, and we would lift her up onto the bed for an afternoon nap.  I am not sure when it happened, but at some point Maggie transitioned to a preference for my lap over that of Spousal Unit.  Maybe because I always sat in her "spot"?  I will never know, but I am grateful that we had the special time together.  I am sure that some of her fur is woven into the cross-stitch that I have been working the last few months!  It is also a blessing that the kids had a chance to say goodbye, in their own ways.  # 1 Daughter and the Boyfriend were here in August, and although we had no idea Maggie would pass so soon after their visit, a blind man could have told you that old age was taking its toll.
The weekend before Maggie died, she stopped eating.  She would hover over the food dish, and meow, but she didn't take a bite.  I imagined that she felt nauseous.  We got her into an emergency appointment on Monday afternoon, and #1 Son sat with her on his lap that morning; we all anticipated that we would have to make the tough decision.  As it turned out, the vet said Maggie was very constipated.  After some treatment, the vet said that we should take her home and let the treatment work its way overnight.  Relieved, I went home with a lighter heart.  We made Maggie comfortable and then went on a previously arranged kayaking/fishing trip for a few hours. 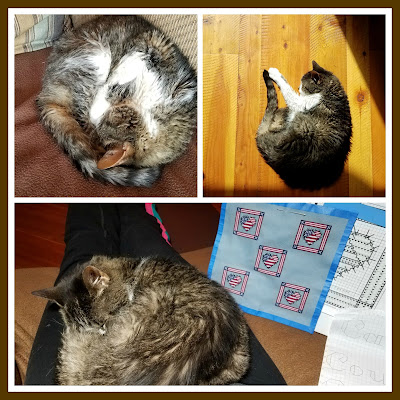 Upon our return, imagine our dismay to find Maggie hiding in the one of the benches with her litter box.  This was her go-to location when scared by something, such as thunder.   At first, I left her there, but after a while, I grew concerned.  When I picked her up, she was so limp.  It was the worst feeling in the world.  For the next couple of hours, Spousal Unit and I took turns cradling her.  Occasionally she would try to lift her head, and through a cascade of tears, we told her it was OK to let go.  #1 Son was with us when, resting on the chest of Spousal Unit, she finally gave a little sigh, and was gone. 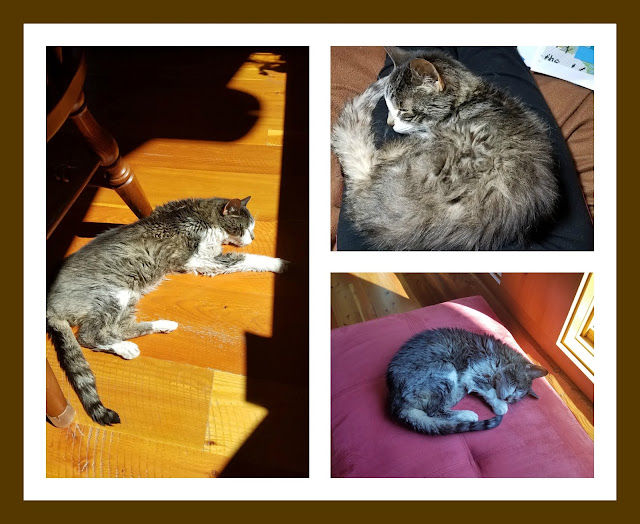 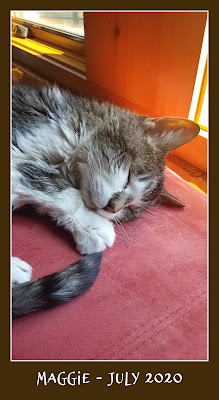 Fifteen years.  Four homes.  Two high school and two college graduations.  She was there through it all, and gave us untold moments of joy and laughter and companionship.  That is what we will remember.  At the end, she may have been deathly skinny, and her fur might have lost the luster of the early years, but she will always be a beauty in our hearts.