Tomorrow is the day.  We start our seven-day journey from Ohio to Montana. So much has led to this point in time.  Selling the house in Cleveland.  Moving into temporary digs near Dayton.  The retirement gatherings.  Flying #1 Daughter to San Francisco for her summer internship.  Taking the cats to the vet for a final check-up. Transitioning the computer and Rav4 to #1 Son. Supervising the packers who boxed everything to be loaded on the truck tomorrow. It has been a whirlwind; we are ready to get on the road!


As I have been preparing for this and thinking about blog posts for our trip, I studied other westward journeys and I learned a few things (or re-learned my eighth-grade history – take your pick).
The Louisiana Purchase occurred in 1803, opening up western territories.
Thomas Jefferson commissioned the Lewis and Clark Expedition to map the newly acquired area, to find a practical route through it, and to establish an American presence in this territory before European powers tried to do so.  The expedition also had a scientific and economic agenda: to study the area's plants, animal life, and geography, and to establish trade with local Native American tribes. 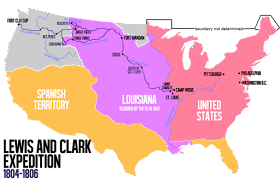 From May 1804 to September 1806, this was the first American expedition to cross what is now the western portion of the United States.
My lesson from this? If not for the Louisiana Purchase, we would be moving to France!  I fancy ourselves as modern day explorers, and I welcome the prospect of divulging fun facts about the places that we will visit over the next seven days.  Watch this space.
Starting in 1830, many pioneers launched from St. Louis or Independence, Missouri onto the Oregon Trail in order to cross the Great Plains.  At that time, Cincinnati, Detroit, Pittsburgh, Chicago, St. Louis, Kansas City, and Minneapolis were brand new towns; the “frontier” was beyond the Mississippi Valley. Note: amazing to consider how much has been altered in these previously untamed spaces, all in less than 200 years. I am grateful that Montana still has significant wilderness.
The Oregon Trail is a 2,170-mile east–west, wagon route and emigrant trail that connected the Missouri River to valleys in Oregon. The eastern part of the Oregon Trail spanned part of the future state of Kansas, and nearly all of what are now the states of Nebraska and Wyoming.
The journey from Independence, MO to Oregon along the Oregon Trail typically took 4 to 6 months. 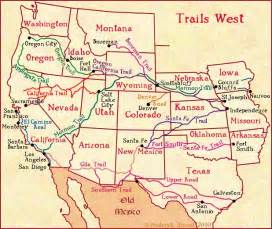 Wagon Trains had large numbers of livestock such as cattle and sheep. Note: I have been known to complain (mildly) about the upcoming challenge of transporting 2 cats across 1,895 miles. (I will have Maggie and Josie in the 4Runner; Spousal Unit will have the company of #1 Son’s parakeet, Tom, in the Audi.) Having now refreshed my memory on the nature of the trek for the pioneers, I will keep my pity party to myself.
The pioneers who set out from the Eastern United States were looking for new homes, seeking their fortune, or both.
Thousands of the pioneers were relatively recent immigrants; between 1845 and 1847, one and a half million people emigrated from Ireland due to the famine. Note: John Gerhard Nickolaus, Maria Elizabeth, Heinrich Jacob and their parents boarded the ship Cassander on August 22, 1834 to sail to America from Germany.  John Gerhard Nickolaus was my great, great grandfather, who settled in Northwest Ohio.  A bit later - May 3, 1990 - the Spousal Unit emigrated from England – is it just a coincidence that is the same day we will arrive in Montana?  In my imagination, we are completing an emigration that was put on pause …
Many people did not survive the journey, due to heavy rainfall, diseases such as cholera and smallpox, and blizzards.  10,000 people died on the Trail between 1835 and 1855.  (Contrary to popular belief, attacks by Indians were rare; the local tribes often welcomed the wagon trains for the trade.)
The Bozeman Trail was an overland route connecting the gold rush territory of Montana to the Oregon Trail. Note: the Montana state motto is Oro y Plata, which means Gold and Silver in Spanish.
____***_____
It has occurred to me, as I sit here writing this, that I have not mentioned any sense of loss for leaving Ohio.  I reckon this is because I have had so much time to prepare for this moment, I am emotionally ready.  It could also be explained by this quote from Rick Godwin: “One reason people resist change is because they focus on what they have to give up, instead of what they have to gain.”  Like the pioneers before me, I am seeking a new home and the adventures that will inevitably come my way, and this makes it easier to let go.
Wagons ho!