For many, February signifies chocolate, hearts and roses.  For me, it's that and more.  My birthday.  Super Bowl Sunday.  And now, after our first February in Whitefish, the crazy town-wide bash known as Winter Carnival.  Here's a re-cap of February's festivities.

King Ullr and his Queen of the Snows, ably assisted by a Prime Minister and other members of the royal court, fete the town and its subjects each February, to commemorate the King protecting the village from a fierce band of snowmen called the Yetis.

(Seriously.  59 years ago, a dozen community leaders dreamed up this fairy tale to brighten the dull days of February.  And it is a BIG deal.) 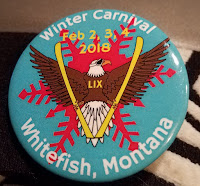 This year, the King recruited Eddie the Eagle (a British skier who in 1988 became the first competitor since 1928 to represent Great Britain in Olympic ski jumping) to serve as Grand Marshal for the Carnival.  And so the 2018 Carnival theme of "Fly Like an Eagle" was born.  Of course, for Spousal Unit (being from the UK) this was something of an emotional event, to see his countrymen about town, starting with the Skijoring event.

Skijoring puts a skier behind horse and rider, holding onto a rope secured to the back of the saddle.  The skier then maneuvers a number of jumps and 'gates' on the ground (akin to slalom skiing).  At our particular event, the skier also had to snatch one or more rings from a pole along the course, depending on the level of the competitor.  The shortest time wins!

In true Montana fashion, the fans endured over four hours of cold to watch these mad people compete.  Of course, the alcohol, food and cowbells helped with fan engagement!

Spousal Unit just about burst his buttons with pride when Eddie the Eagle gave it a go - on borrowed skis, with borrowed boots, having never done it before.  The cheers of "Eddie, Eddie" were loud and persistent.  Rock on, Brits!

Just when you think it can't get any zanier, you witness the Penguin Plunge, the chance for (apparently) perfectly sane people to jump (voluntarily) into Whitefish Lake.  While the royalty observe from a safe distance, teams that have raised funds for Special Olympics leap into the frigid water.  Yeah, baby, it's cold in there!

OK - whew - are you ready for something a little tamer?  Our church hosts the Pie Social during the Carnival, and we put our best foot (well, recipe) forward with Spousal Unit's dessert specialty, Pecan Pie. 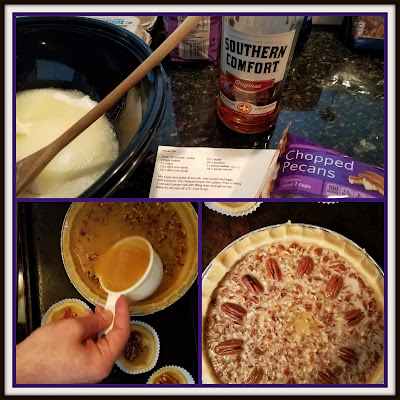 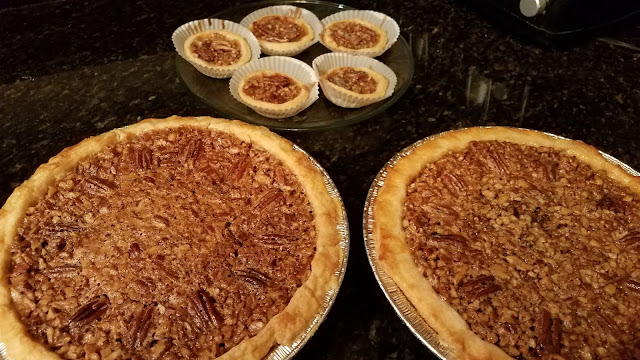 On the day of the Social, we sampled the competition (oops, the other pies) and chatted with folks at our table.  Just before we left, King Ullr and his royal court, including Eddie the Eagle, entered to the traditional trumpet blast and "All Rise for King Ullr and the Queen of the Snows!"  Spousal Unit was chuffed to bits (read: very pleased) to have the opportunity to introduce himself to Eddie, shake the Olympian's hand and get a picture with him.  Who would have imagined two Brits would cross paths in Whitefish, Montana, having originated in Cheltenham and Durham?

The capstone event for the Carnival is the Grand Parade.  Temperatures were mild (by Whitefish standards) and swelling crowds lined the streets. 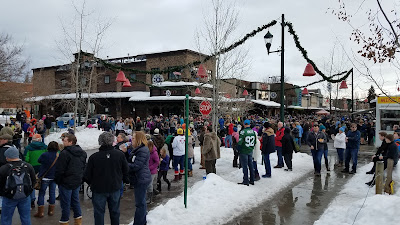 Soon enough, Eddie the Eagle launched the Parade, and the kids, armed with all manner of candy collection devices (plastic bags to buckets to pillow cases) scrabbled for the goodies.  Fly Like an Eagle!


For many years, we hosted a grand party at our home in Cleveland.  It became a bit legendary for good food and camaraderie, even if the games were not the best or the half-time shows left us unsatisfied.  This year, we watched the spectacle at the house of our next-door neighbors; for Harry, a Philly native, it was a dream on the line for his hometown.  For us, we just desperately wanted a team other than the Patriots to win!  (Sorry if you're a Patriots fan.)  It was the most exceptional game I can remember for years - down to the wire.  The fourth quarter sack with Brady turning over the ball.  Brady's Hail Mary pass that went incomplete.
We were all jumping up and down and screaming at the top of our lungs.  Yes, I know it's just a game, but sometimes there is untold joy when your team wins!

I love to start the day with coffee in bed, so I knew a special day lay before me when Spousal Unit brought me not only coffee but my favorite breakfast - smoked salmon with caper sauce on wheat English muffins. 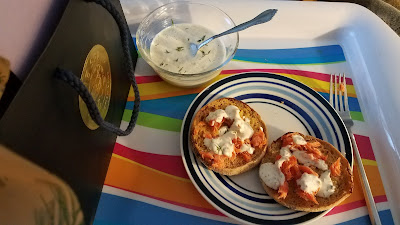 The spa card from Spousal Unit carries the promise of some 'just-for-me' pampering - a facial and pedicure may be just the ticket to celebrate Spring in a month or so. Since I am obsessed with hedgehogs but forbidden to add any real pets to our household, this stuffed beauty and new socks join my make-believe hedgie collection - thanks, # 1 Son! 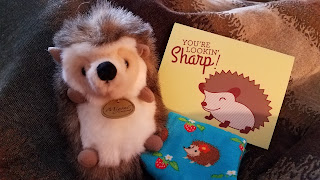 Of course, the cards and well wishes from friends and family poured in - isn't it great to be remembered? 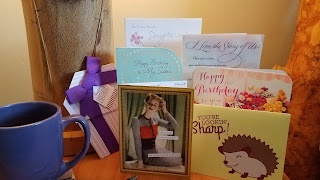 We rounded out the day visiting our log house in construction (the ultimate gift), relishing The Post at the movies and noshing on steaks at the Whitefish Lake Restaurant.  I felt celebrated and adored (and not a day older!)

We celebrated Valentine's Day a few days early to avoid any overlap with Ash Wednesday, a day of fasting.  As Spousal Unit does most of the meal preparation, I wanted to cook something special for him - voila - Nutella French Toast!  A decadent breakfast, a perfect lead-in to the Lenten season. 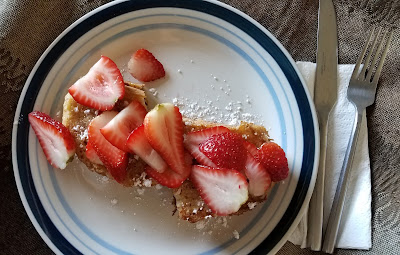 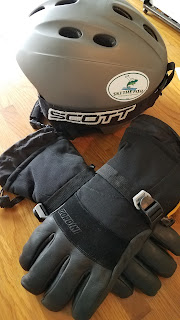 (A few days later, my frozen fingers testified to the need for new ski gloves worthy of our frost-bite-warning mountain temperatures.  So Spousal Unit whisked me off to the Sportsman and Ski Haus for these beauties.  So toasty.  This is how we like to celebrate holidays - we buy practical things and we 'assign' them to a holiday, even if it's after the fact.  Happy Valentine's Day to me!)

Sometimes the best revelry is hunkering down at home with simple pleasures, such as a fire, embroidery and our cats.

Cats remind us to relax (even when stressed out watching our favorite sports teams), and to nap!

And sometimes, they simply make us laugh.  That's the finest festivity of all!