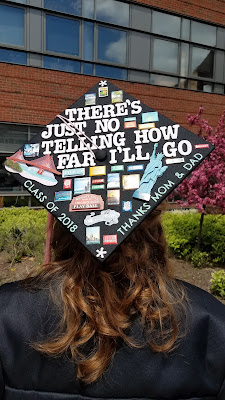 The tassel has been turned. 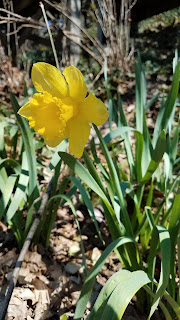 Gone are the tears that fell like droplets of rain.  In their place, smiles broke through and shone as bright as daffodils.  Fresh opportunities beckon, like the crackle of the binding when opening that new diary to the first blank page. 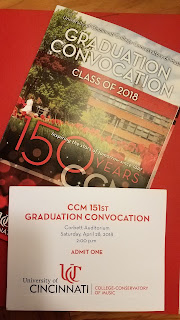 #1 Daughter (AKA Graduate with Hat) graduated from the University of Cincinnati's College-Conservatory of Music (CCM) on April 28.


A whirlwind week with family and friends began quietly at my sister's house with a morning garden walk.  I used to claim Autumn as my favorite season, but these days I give my affection to Spring.  Pregnant buds giving birth to unblemished leaves.  Vibrant floral hues taking over from the gray of winter.  The promise of fruit hidden within the flowers.  All of it a fitting metaphor for the bright-eyed hope of spring commencement. 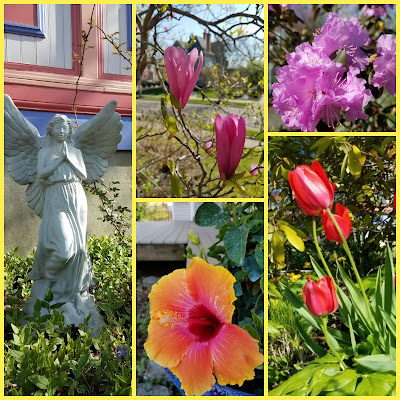 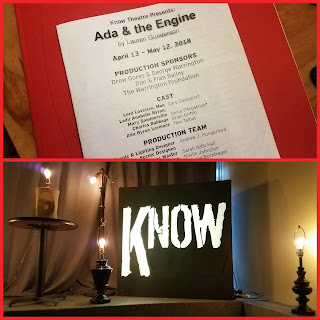 My Mom hosted lunch at her house (it doesn't get any better than homemade sauerkraut soup and bread, followed by friendly Euchre competition!)  We rounded out the day with Ada and the Engine at the KNOW Theatre in Cincinnati; Graduate with Hat serves as the Stage Manager for the show, a position she landed before she even graduated.  Continuing the streak, she has been offered the Resident Stage Manager position at the KNOW in the fall, following her three-month gig at Theatre Aspen in Colorado.  It's always reassuring to the parents when a graduate is able to put that degree to work right away!

The big day dawned sunny but cold.  We were grateful for our fleece blankets as a few of us huddled together on the metal bleachers of Nippert Stadium (and so was the dad seated in the row behind us, who shivered without the sport coat borrowed by his graduating son ... out of compassion, we loaned him one of our blankets partway through the 2.5 hour ceremony).  Just as the sun edged toward our section, clouds moved in with a bit of wind ... brrr!  Graduate with Hat was glad for the sweater under her gown, but it didn't do much for her bare legs ... it felt good to get moving toward the stage and the diploma.  Over 2,000 students walked the stage in her commencement, and we were proud as peacocks to hoot and holler when it was her turn! 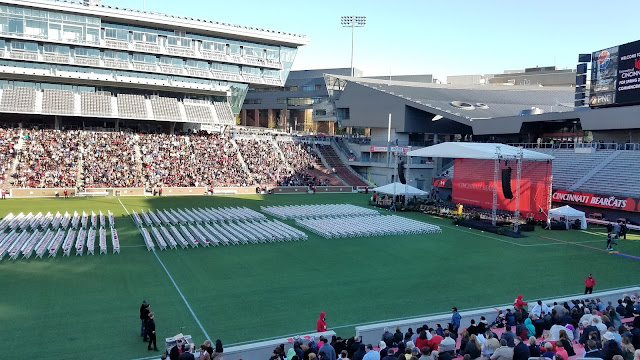 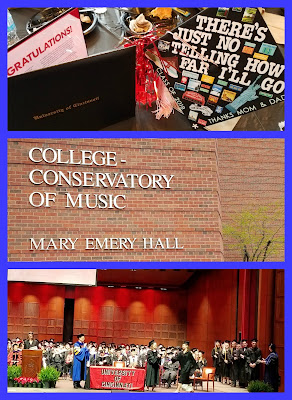 The rest of the family joined us for lunch hosted by CCM (thankfully, indoors!)  When feeling returned to my fingers, we briefly ventured into the courtyard to snap family photos, especially at the customary graduation photo spot near the CCM sign.  The afternoon wrapped up with the CCM Convocation, a special graduation ceremony for CCM students.  As I looked around Corbett Auditorium, I couldn't help but remember an orientation meeting that was held just around the corner in this same building.  Where had 4 years gone? 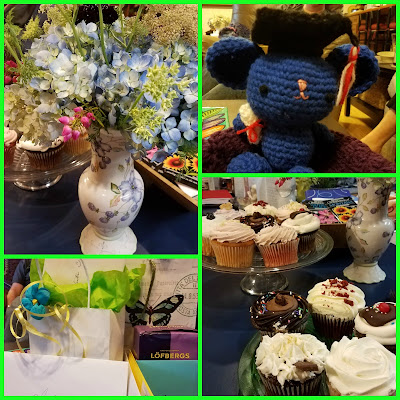 Back at my sister's house, we noshed on a Mexican food buffet and gourmet cupcakes while catching up on family news and playing cards (more euchre!)  Graduate with Hat opened her presents and cards while the family looked on.  All too soon, yawns and sleepy eyes suggested it was time to bring the curtain down on this emotional yet eminently satisfying day.

Our eventful weekend continued on Sunday with lunch at the Melting Pot, long a birthday favorite of #1 Son, who turned the big 20 in April.  His girlfriend joined our meal in Columbus, and we observed that it's only two years before we are celebrating their commencement.  Oh my!  Then our journey led us onward to Cleveland to meet up with former neighbors and work colleagues.

What a walk down memory lane. Twenty of the "Super Bowl" gang gathered at the Chesterland Tavern, akin to the old days when our house was the meeting place for football, food and friendship.  Driving cross-town to have lunch with former work colleagues was a deja vu moment, recalling hundreds of times I'd passed that way, and there was laughter a-plenty as we shared stories old and new.  A night at Punderson State Park was reminiscent of a stay here over 10 years ago, when we returned to Cleveland from the UK and rented a cabin until our furniture arrived.  Joining friends in the hotel bar, three hours passed like quicksilver, as time does when you re-connect with like minds and hearts.

We took advantage of a break in the action to pop in to quaint Chagrin Falls on a sunny afternoon - a delightful spot where our kids tumbled around the town playground and savored ice cream from the famous Popcorn Shop.  For old time's sake, I enjoyed a couple of scoops!  Spousal Unit even caught 40 winks in the warm sun! 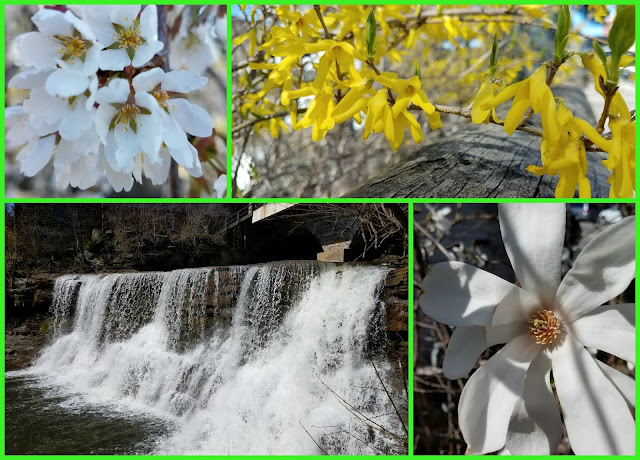 The next day, we were sent on our way with tummies full of a delicious breakfast made by one of our former neighbors (thanks, guys!) On the road again ... back to Cincinnati for an afternoon at the zoo, joined by my sister and Graduate with Hat, who had been aching to see Fiona, a baby hippo born on January 24, 2017.  Apparently, everyone else is just as infatuated with little Fiona - it was impossible to get a picture of her ... but I did manage to capture some nice videos - an elephant taking a bath, feeding time for the giraffes and two Bengal tigers playing (?) together.


As we wandered the tulip-laden walkways, Spousal Unit reminded me that this very zoo had been one of the first places he visited upon his arrival in the US.  Such is the circle of life. 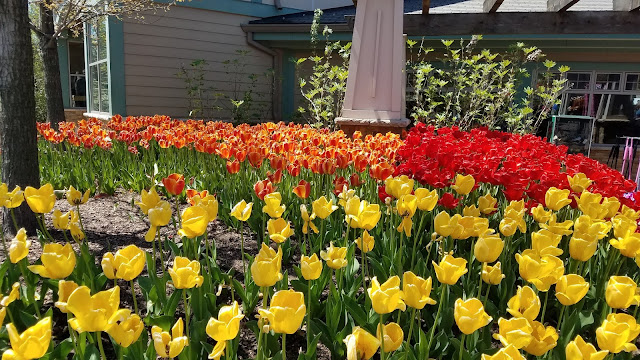 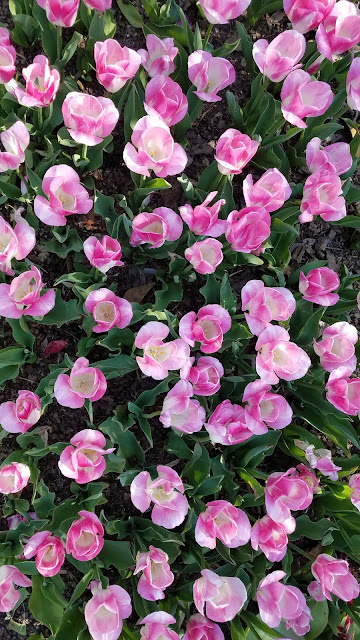 The fun-filled week was capped by a barbecue dinner at my niece's house; we sipped wine and beer while the kids and the dogs entertained us with their antics.  I looked around and sighed with contentment; the last six days had been jammed and I was ready for a 'vacation from the vacation', but it was worth everything to honor Graduate with Hat.