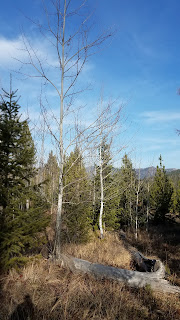 I am cuddled up in our log home, the barren aspen branches waving to me just beyond the windows.  We returned on Tuesday after a three-week getaway, and were greeted by the dramatic transformation from Autumn to Winter.  To quote Dorothy - "There's no place like home", but part of me is already missing the temperate environment in Europe.  So join me for part II of our Hamburg experience.

Give me a choice between sweet and salty foods, and I will lean salty every time.  Hence my pure enjoyment of a typical German breakfast - breads, cheeses, meats and fruit.  Eleven years ago, Dr. H. introduced us to Tete de Moine cheese when we visited her in Switzerland, and since then we look for it everywhere we go.  What a lovely surprise to see it on her breakfast table the second day! 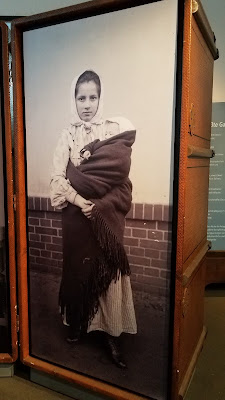 A first-class tour guide considers her audience and their interests, and Dr. H. exceeded my expectations when she suggested the Ballinstadt Emigration Museum as our next destination.  She knows my family emigrated from Germany to the US, and correctly presumed that I would be intrigued to visit the former emigration station in Hamburg that served as the final European home for five million emigrants from the 1850s - 1930s.

The museum takes its name from Albert Ballin, who ran the HAPAG shipping company and prospered from advancing the idea of using the 'tween decks for efficient transportation of emigrants. 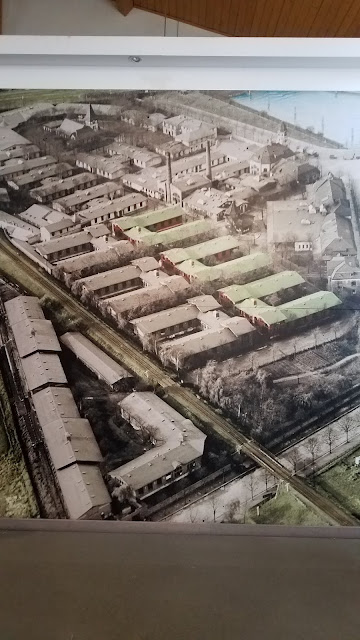 "Ballinstadt" translates to "Ballin City", and this resulted from Ballin's vision to satisfy the emigrants' leisure and entertainment needs.  The picture to the left shows Ballinstadt in "the day", with emigration halls, treed walkways, a church, a dining hall, playgrounds and a music hall.  Only three of the buildings remain today - if you look closely, you can see that three of the "C"-shaped buildings are colored a light green - these are the remaining buildings.  In 2007, the Museum was opened utilizing those three structures. 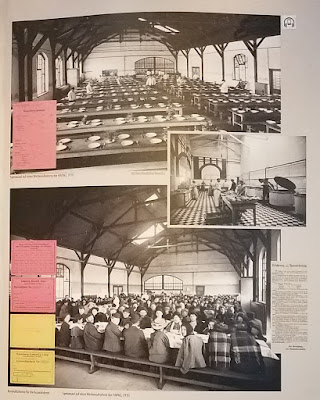 The emigration halls were extended several times from 1898 to 1907, and collectively were known as "The World's Biggest Inn".  Three thousand people could be fed in one hour; 8,000 to 10,000 bread rolls were consumed every day.  The steady influx of emigrants from Eastern Europe led to constant overcrowding from 1904 on.  Some days the halls were home to as many as 3,500 people - as opposed to the maximum permitted 1,200.  As recent world events continue to demonstrate, people will endure unspeakable conditions in the search for a better life. 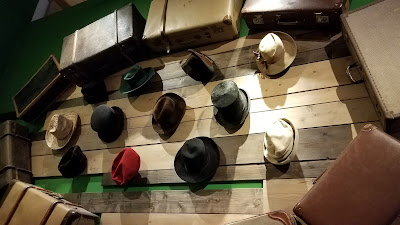 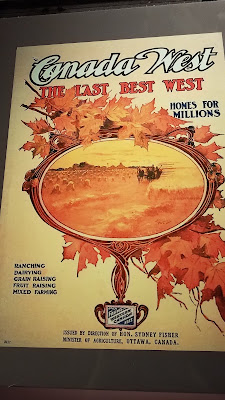 In a series of well-appointed rooms, the museum presents the "pull-factors" (Gold Rush, popular literature, the American Dream, letters from other emigrants, giving away land through legislation such as the Homestead Act in the US) and "push-factors" (lack of job opportunities, racial discrimination, wars and political intolerance) associated with emigration.  I was fascinated to find that Canada has utilized the catch-phrase "Last Best West" to attract people.  Montana today is commonly referred to as the "Last Best Place".  Go figure! 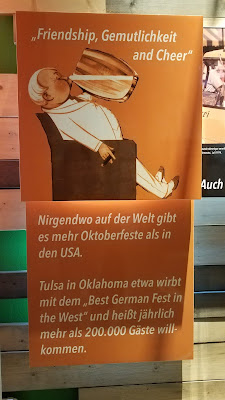 The final building of the museum highlights the experience of emigrants once they reached the US, as well as the evolving state of migration around the world.  For example, the "green card" was introduced in Germany in August 2000 to attract foreign experts in information technology.  Here I learned that the US celebrates more Oktoberfest than Germany! (By the way, we did not attend Oktoberfest while in Hamburg, due to a scarcity of tickets.  In the end, I am glad - I learned more about Hamburg through Dr. H. and her choice of destinations than I ever would have learned from Oktoberfest!) 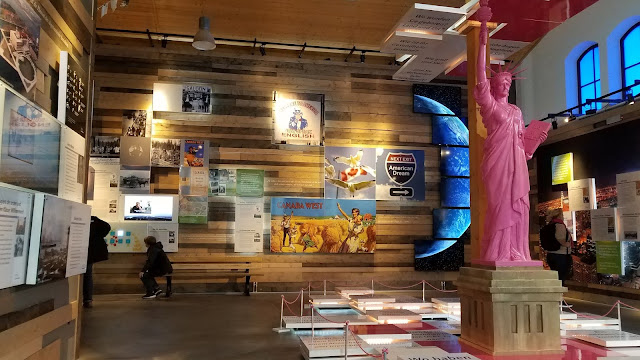 And last but not least, the museum offers free access to Ancestry.com via a bank of three computers conveniently located next to the café.  I was delighted to find the records of my father's family, who emigrated from Bremen, Germany in 1834.  I was already familiar with their emigration story, but it was still exciting to see it here after four fascinating hours in the museum.  My heartfelt gratitude to Dr. H. for a unique educational, mind-expanding experience!

There was a down-side to the museum - Lola was not welcome, so when we returned to the apartment we retrieved the faithful sidekick and strolled to the market for some foodstuffs. 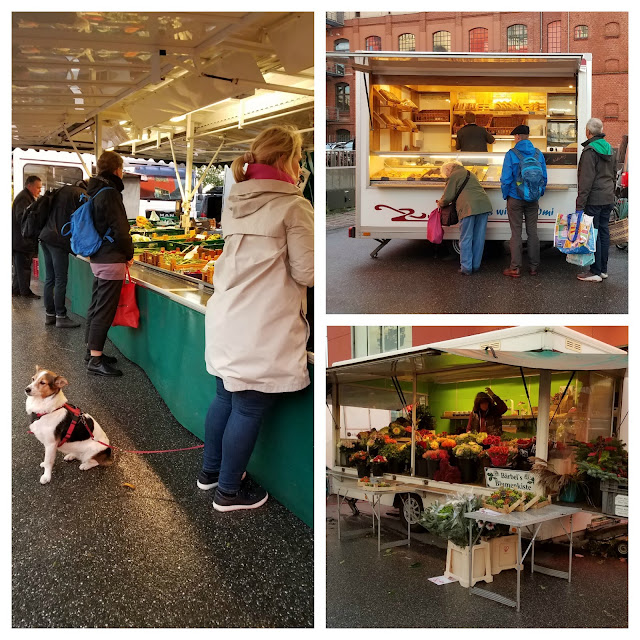 Along the way, we passed the TRUDE, the head of the boring machine that was used to create a tunnel under the Elbe.  As you can see in the picture below, it is almost four stories tall.  The TRUDE is displayed here because the Museum of Work is across the courtyard - although we did not go in the Museum, I think it would be worth a visit in the future as it explores the social, cultural and economic impacts of changes in work over the last 150 years. 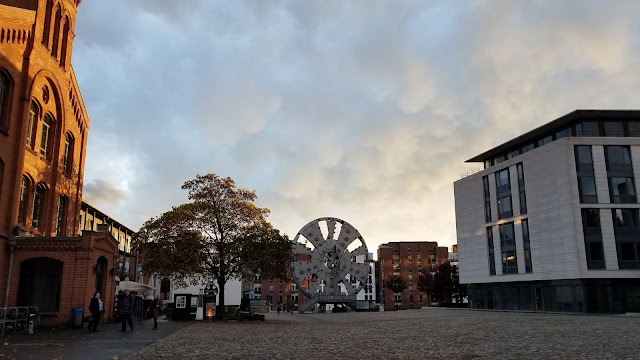 Dr. H. prepared a delicious dinner for us, and we rounded out the evening playing cards, drinking wine and doting on Lola.  Soon enough it was time for bed to ensure we would have the energy for the next day's plans. 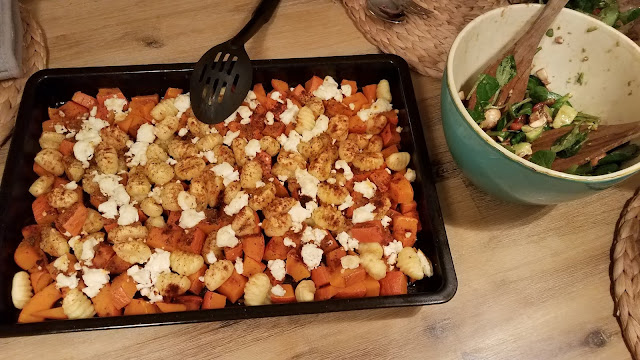 In my experience, cities are always undergoing transformations.  Some neighborhoods decline; others become trendy.  On our third day in Hamburg, we ambled through Sternschanze.  From the 1930s to the 1970s, the quarter was home for a large number of working-class people. 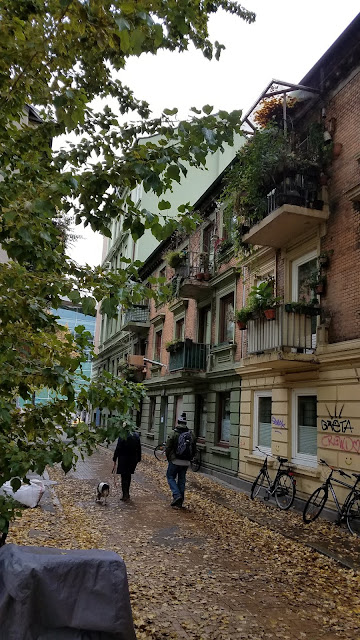 In the 1980s, families and students started to move into the area.  Since the beginning of the new millennium, Sternschanze is in vogue and runs the risk of pushing out lower-income residents as more affluent people drive up prices.  Nevertheless, political demonstrations, mostly by leftist groups, take place here and sometimes lead to clashes with police.

The center of this activity is often the building Rote Flora (shown below) which was squatted by leftist groups in 1989. 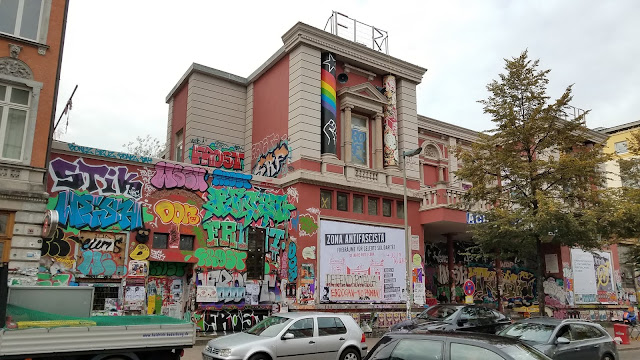 As you can see above, graffiti is common in this quarter to the point of being one of its hallmarks.  What are your thoughts on graffiti?  For some people, the very word evokes a negative reaction.  Generally, I don't like the look of graffiti on buildings, but in Sternschanze, it goes beyond "normal" graffiti to works of art and murals four stories tall. I admire the talent and creativity (and the willingness to work at great heights). 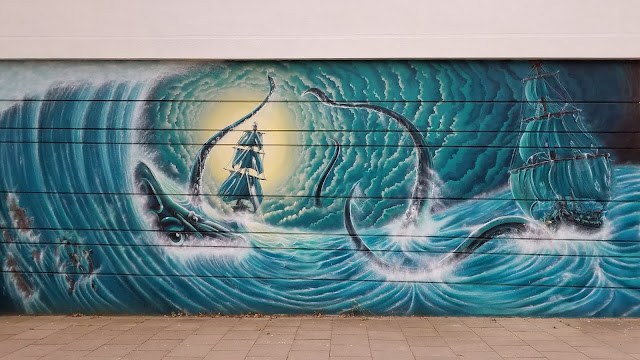 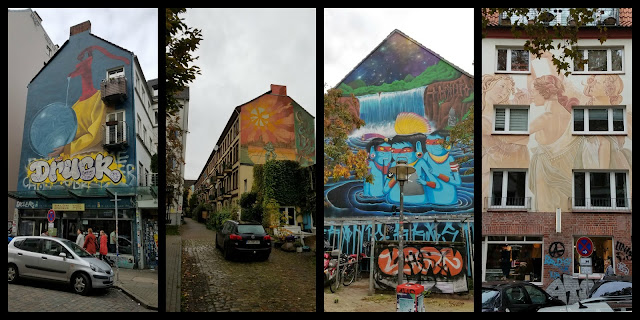 Restaurants and cafes abound in this quarter, and as a light rain began to fall, we opted for coffee and cake at one of Dr. H's favorites.  Our table was tucked under the awning on the front sidewalk, and I was pleasantly surprised to find blankets on each of the chairs.  Dr. H. pointed out that Hamburg residents love to be outside in all manner of weather, and restaurants have adapted by making blankets and warmers standard equipment.  Right up my alley! 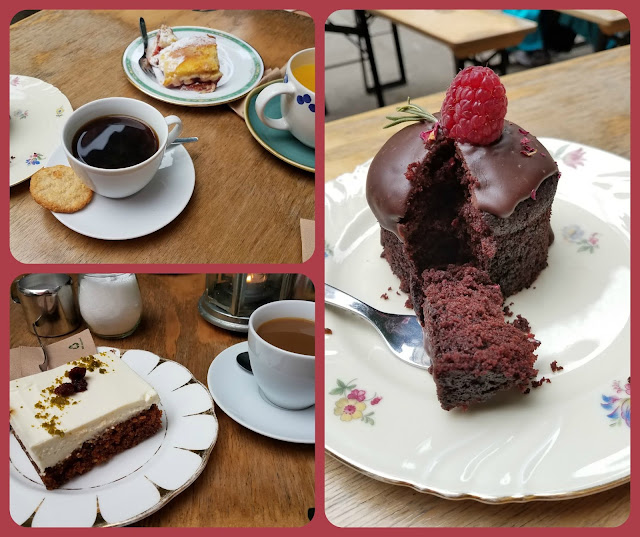 As I relished the total civility of coffee and cake while snuggling under a warm blanket, I reflected on the contrast between the emigration museum and this avant garde section of the city.  Some people emigrate to find a better life, and others work to make a better life from the inside.  We may struggle with their methods, or how they choose to express their opinions, but it is clear that the intention springs from the same hopes and dreams.

You are invited to the Inlinkz link party!
Click here to enter
Posted by Angie at 10:55 AM