Mosaic Monday #75: The Gift that Keeps on Giving

And no, I am not talking about the coronavirus!

I am talking about trail cameras.  As faithful readers know, my personal trail cam has captured everything from bears to sandhill cranes to badgers.  I have also had the good fortune to have access to two other cameras that belong to a neighbor.  Recently, I retrieved her disks, which had not been checked since August.  While this meant scrolling through several thousand photos, it also meant a bonanza of wildlife.  Join me for a walk on the wild side!

By far, deer have populated the majority of the photos, with coyotes in second place.  In most cases, only one coyote appears in each frame, so it begs the question whether it is the same coyote each time.  As you study the pictures throughout the post, let me know your conclusion!

Sometimes, I have wondered what is happening just out of view of the camera.  For example, check out the stance in this photo - doesn't it look like it sees something?  And the legs are pushed down and bent, as though it is ready to run off in the other direction.  Very different than the normal loping style. 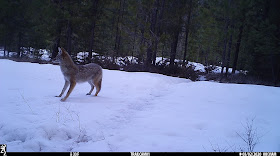 Once the camera detects motion, it takes three shots in rapid succession, so at times I feel that I am watching a video as I flick through the photos.  (It reminds me of those flip books some kids used to make in school; a slightly adjusted image on each page, when flipped quickly, mimics motion.)  In this series of pictures, one coyote sits (patiently) in the background (look closely), while another paces (not so patiently?) on the driveway.  (Please note that I tried something new in this post - using Movavi photo editor to turn still photos into a "video".  Since I was not willing (yet) to pay for the full version, a watermark shows up on the video periodically - sorry for that.  I was looking for something that gives you the feeling of motion.  Let me know what you think of this and the other "videos" in this post.)

Does are so ubiquitous that I didn't bother to save any of their photos.  Not so with bucks.  They are so rare on the trail cam, it's enough to make me question where they all go in the winter.

The turkeys also have a disappearing act.  These shots were all taken on the same day in September, not to be repeated on either camera.  I can only assume that they head for lower ground with more plentiful food sources.  The first time I saw this series, it made me laugh out loud how they parade UP the driveway, and then DOWN the driveway.

A feral cat also appeared on the camera several times, always on the driveway (sorry, I didn't keep any of those pictures).  In fact, most of these shots are from that set-up.  It surprises me - wouldn't the animals prefer an area that is protected by the cover of trees and bushes?  Perhaps the driveway offers an easier path with snow made shallower by the sun.  Only they know! 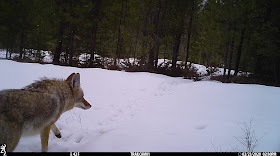 The following series shows three coyotes in one of the shots - very unusual based on the time I have been monitoring this site.  Were they comparing notes?  Preparing to hunt together?  Coyotes normally hunt alone or in pairs and rarely as a pack, unless the prey is a deer or other large animal.

As winter continues, I think about the struggle for survival for all of these animals.  Were these coyotes running after something or FROM something?

In the following shot from March 1, the coyote certainly looks healthy and well-fed.  In Northwestern Montana, coyotes can become prey to bears, wolves, mountain lions, and other coyotes, not to mention man.  In past posts, I have shown a picture of a wolf in almost the exact same location as the shot below. 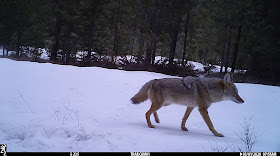 And lest you think I joke about mountain lions … this brings me to the highlight of this post.  The following pictures show the mountain lion crossing the driveway at a point that would be directly behind the coyote in the picture above.  I know that mountain lions live in this area, having seen other trail cam pictures and having walked along a path left by a mountain lion dragging a deer for a half a mile.  Somehow, seeing these pictures from a trail camera that I placed and that I check regularly, is an extraordinary moment.


Happy Easter, everyone!  I have been working diligently on my attitude the last few days, and participating in Holy Week Masses via live stream has certainly helped.  At times like this I also turn to Christian music, and I was struck once again by the words to the song Indescribable by Chris Tomlin.


"You see the depths of my heart and You love me the same."  What peace this brings to my heart and soul.  The ultimate Gift that keeps on giving.  I pray that you are finding peace and encouragement during these tough times.