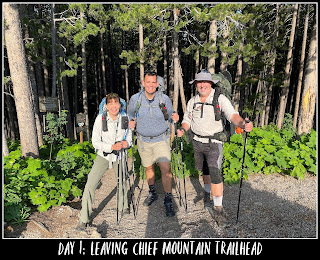 Have you ever run out of adjectives to describe the beauty that surrounds you?  That's how we found ourselves on our most recent camping trip in Glacier National Park.  We used "spectacular, magnificent, incredible, majestic".  At times, it felt that only "wow" was fitting for vistas that are almost indescribable.

One of my nephews joined us, and between the two of us, we snapped hundreds of photos!  Don't worry - we won't make you scroll through them all, subjecting you to the famed family vacation slide shows!  But I will split the trip in half to make it a bit more manageable for me and palatable for you.  Here we go! 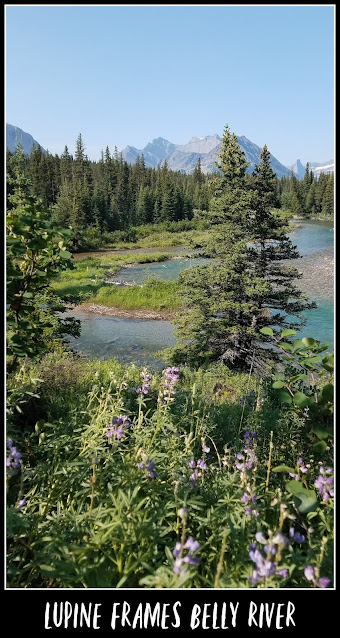 Chief Mountain Trailhead sits in the far northeast corner of the Park; from the parking lot, you can see the border entry into Canada.  Waterton Lakes National Park lies to the northwest.  One day, the border will re-open and the orange cones blocking the highway will disappear!  Fortified by blueberries and graham crackers with peanut butter (no restaurants were open for breakfast), we left other hikers behind, and headed south, into the Belly River area of Glacier.  We had been told by friends about the stunning landscape, and we were not disappointed. 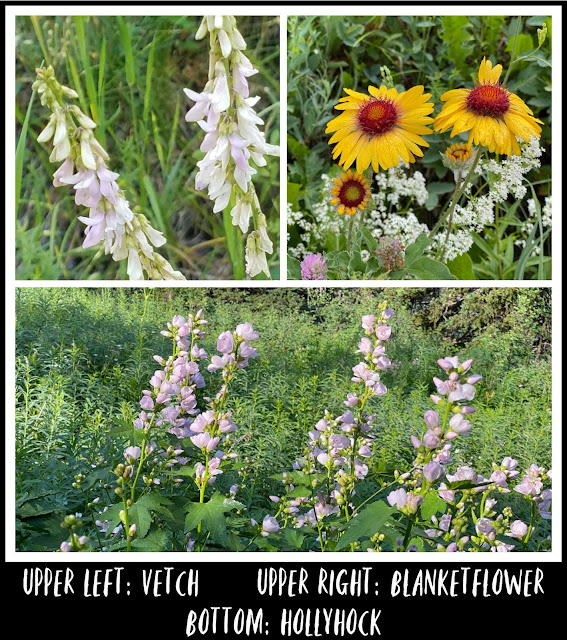 As we shot the scenery, we commented often that the pictures didn't do it justice.  The human eye can capture the macro and the micro, simultaneously.  Believe me when I tell you that this meadow was awash with flowers! 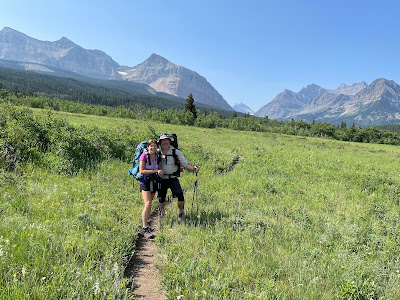 After 2 hours and 21 minutes, 6 miles and 150 feet of elevation gain, we reached Gable Creek Campground, our home for the night.  To reserve campsites in the backcountry, one has to make advance reservations or show up at the office in the morning and take what is available.  In our case, we submitted our request on line on March 15, and we received approval on April 5.  Gable Creek has 5 campsites; since we arrived relatively early, we snagged the largest, which easily accommodated our two tents. (Can you see me sitting to the left of the orange tent?) 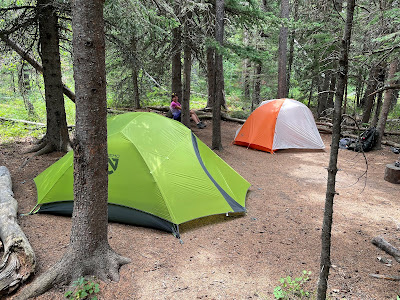 We had a free afternoon, so we explored a bit after we set up the tents and secured the food on the bear hang.  The Belly River ranger station is located less than a half mile from the campground, and we sought out the park ranger on duty.  (When we checked in at the backcountry office, they told us that our exit route, through the Ptarmigan Tunnel, was not going to be possible; the tunnel was still closed!  But, they expected it to open well before our exit date.)  And sure enough, the ranger confirmed that the Tunnel had been opened.  Whew! 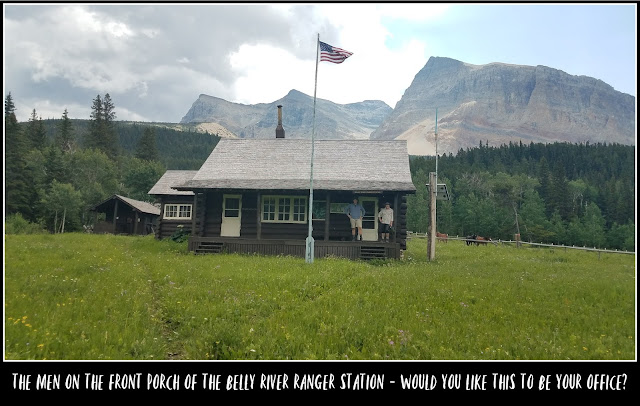 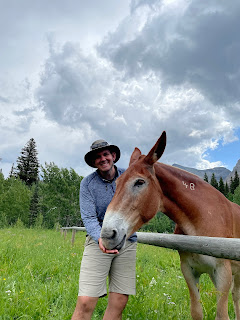 The ranger was a bit prickly; Man with Hat inquired about fishing in the Belly River, and she brusquely informed him that it was his responsibility to know the fishing regulations!!!  Behind the ranger station, can you see the two horses and the mule in the field?  My nephew politely asked if we could go see them, and the ranger said yes.  The horses would not come to see us, but the mule did not hesitate for a moment!

We saw many hikers in this area, including someone I knew from volunteering at the Food Bank!  All this way and I run into someone I know!

The pasture fencing around the ranger station was extensive, and I loved the element in our photos. 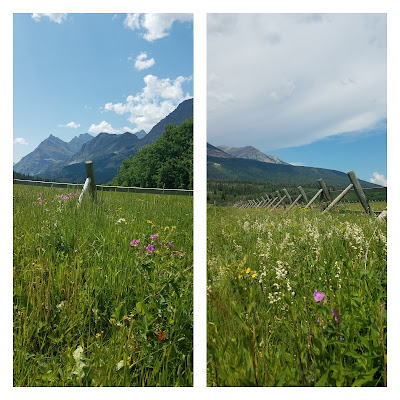 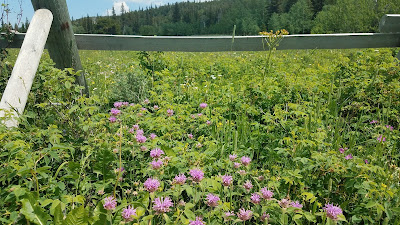 The Belly River lay in the opposite direction from the ranger station, and we discovered a delightful swinging bridge traversing it. We spent the afternoon here, each to our own devices.  My nephew hung his hammock nearby.  Man with Hat tried his hand at fishing.  I took pictures, completed some word searches, and just absorbed my environment. 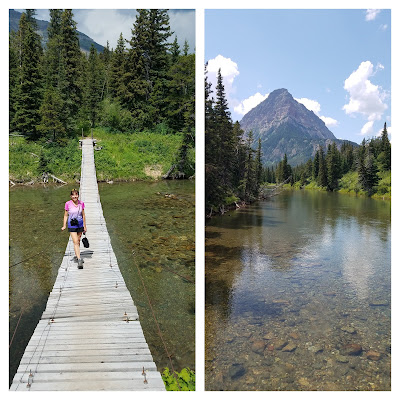 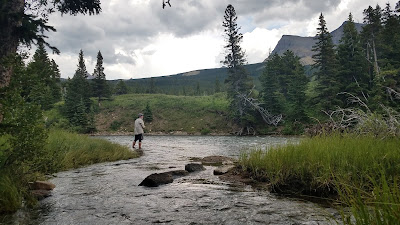 I was delighted to discover a large stand of White Bog Orchid, Glacier's most common bog orchid.  I have seen this orchid countless times, but it never ceases to amaze me with its height and delicate beauty. 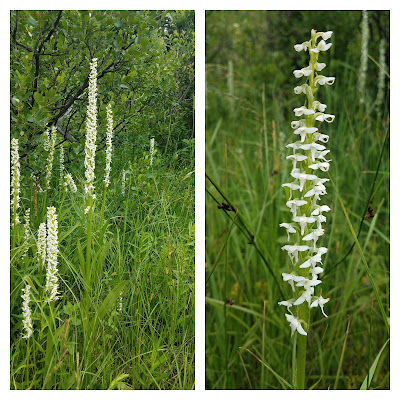 Near dinner time, we saw a team cross the river.  So cool! 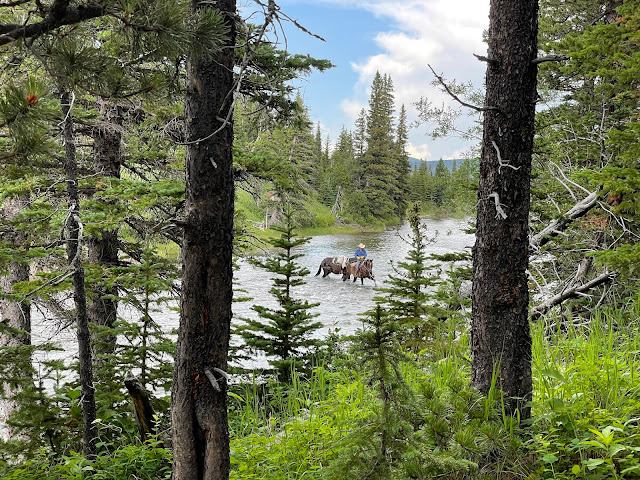 Dinner featured spaghetti for my nephew and beef stroganoff for Man with Hat and me.  Gathered around the campfire and cooking area was a motley crew - a couple from New Hampshire, two guys from California hanging with a fellow from Montana, and a hilarious couple from Minnesota.  After dinner, a German couple arrived and said a grizzly had blocked their path on the way to Cosley Lake campground.  "Is there room for us?"  There was a spare campsite, but we would have made room for them regardless!  We closed the night with a few hands of Gin - Nephew 2, Me 1, Man with Hat 0. 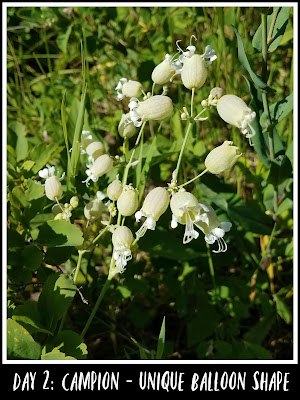 The next morning, we put our fly sheets and tent ground sheets on the pasture fence to dry while we had breakfast.  When we went to collect them, we found our friendly ranger removing them; apparently they were spooking the horses and pack mule as they tried to pass by.  I was a bit chagrined, but who knew the ranger would be taking the horses for a day trip that particular morning?  We crossed the swinging bridge, and within the hour, took a short detour to Gros Ventre Falls.  (In French, it means Big Belly.)  As you can see below, the base of the falls features a large pool, perfect for swimming.  If we hadn't just started our hike, we might have indulged! 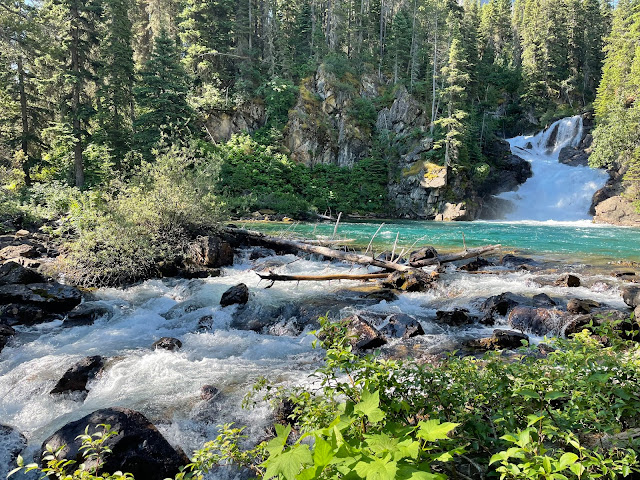 Below is a video of the falls. 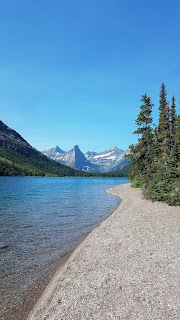 A short time later, we arrived at Cosley Lake.  We explored its campsites and concluded that we would have preferred to camp here rather than Gable Creek since these sites offered views of the lake.  Lesson learned.

We carried on to the foot of Glenns Lake; from that vantage point, the views were obscured by the massive grove of sycamores.  Another day, we might travel onward and explore destinations with intriguing names such as Mokowanis Junction and Stoney Indian Lake.  For now, we retraced our steps, with Chief Mountain towering in the distance and two bald eagles circling overhead.  At Cosley Lake, we took a right turn for the river crossing. 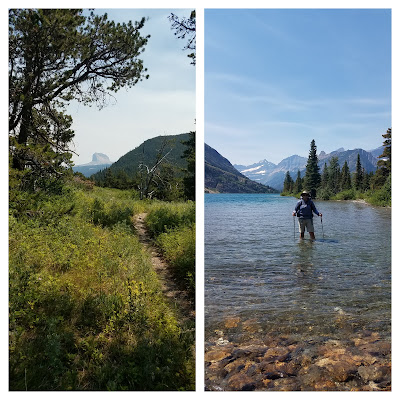 Sometimes river crossings are bone-chilling cold, and you want nothing more than to reach the other side as expeditiously as possible.  In this case, the water was the perfect temperature -- quite refreshing on a hot day.  So, we lingered.  Refilled our camel packs with filtered water.  Snacked.  Man with Hat gave blister pads to a fellow hiker, a young lady traveling with her family. 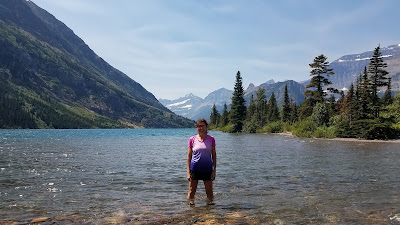 Reluctantly, we shouldered our packs, and the next 1.7 miles felt LONG.  Fortunately, it was broken up slightly by another water feature, Dawn Mist Falls.  In this video, you can see how the waterfall gets its name!!! 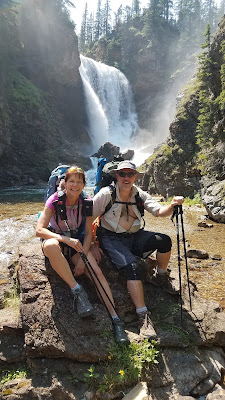 In Glacier, it has been our experience that the trail leads you only to the bottom of a waterfall.  In this case, after climbing a steep section of the trail, we found ourselves at the top of the cascade.  Fabulous!  If you look carefully in the background behind my left shoulder in the picture below, you can see rock formations sticking up from the sandy escarpment of Gable Mountain. 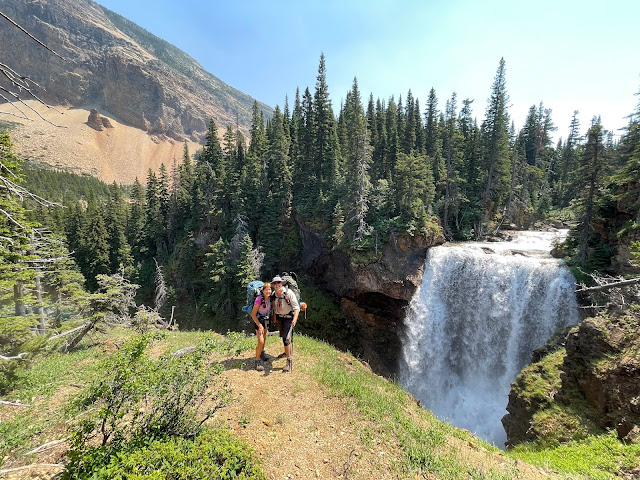 When we reached the foot of Elizabeth Lake, we dropped our packs and put our feet in the water - aahhh.  It was not our final objective, but all three of us needed a break!  Fortunately, the remaining 1.6 miles to the head of the lake and our campground was quick.  We put up the tents and were mobbed by flies!  As rapidly as possible, we completed the task, hung our food and headed to the lake.  Typically, flies and mosquitoes don't bother you when you are out in the open.  The rock/sand bar below became our beach for the next day and a half. 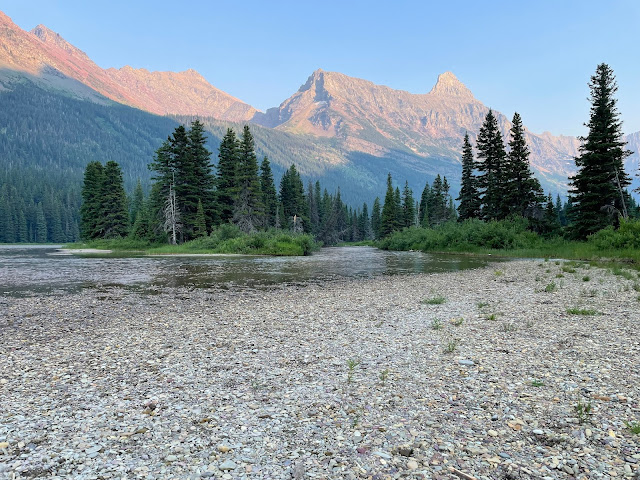 The water you see in front of the sand bar is the Belly River entering Elizabeth Lake. Now, THAT water was bone-chilling cold.  The notch in the mountains in the center of the photo is the location of the Ptarmigan Tunnel, our destination on our last day.  The highest peak on the right side of the photo is Iceberg Peak. 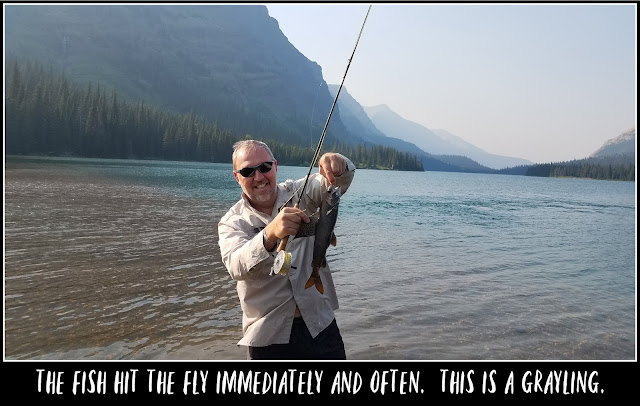 As Spousal Unit began fishing, we reflected on the day's journey - 13.39 miles and 751 feet of elevation gain in 5 hours and 14 minutes - with a deep sense of satisfaction.
My nephew took this slow-motion video of Spousal Unit in action. 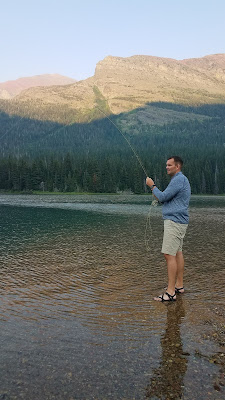 They caught a mixture of grayling and rainbow trout, and threw them all back.  Gutting and cooking fish in the backcountry can be like offering candy to a bear, so we don't.

We could hear a loon calling as we went back to the food prep area and made our dinners.  Although the campground has four sites, only one other couple (from Brooklyn) joined us.

One of the benefits of summer camping in the far North is the length of the days.  We still had plenty of light for the men to continue fishing.  Personally, I was hoping for a moose sighting!

Given that my nephew is new to fly-fishing, Man with Hat provided occasional advice.  No sooner had Man with Hat said "Can I give you a fishing tip?" than my nephew hooked a large grayling!

Here is a video of my nephew (almost) bringing in a fish.

(The strange sound you hear in the background is Spousal Unit blowing up his pack raft.  That evening, it was still too windy for the raft, but that didn't stop them from catching numerous fish.)  Ducks flew in for the night, a frog hopped from the water into the willows, and a raptor did his own fishing in the lake.  I sighed a happy, contented sigh.  And tried to think of words to describe the joy on my nephew's face. 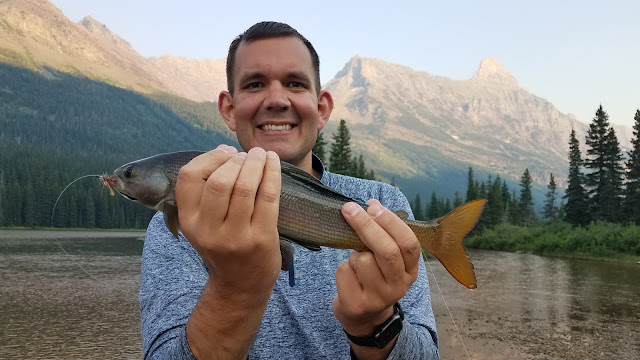