How much time do you invest just observing the world around you? 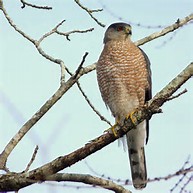 I am very fortunate that, at my recent retirement party, I was given a Spotting Scope by my peers.  The following Tuesday morning, sharp-eyed Spousal Unit, looking through the sliding glass doors, asked “What’s that in the pine tree?” (Note that the pine tree is about 25 yards from the house.) The Spotting Scope (and the World Wide Web) quickly determined it was a Cooper’s Hawk, hunting for other birds.  We happened to have family guests at the time, and without my hubby’s keen observation, this fantastic opportunity would have passed us by.
During our recent trip to Cayman, I had numerous opportunities to be wowed by the environment.  Here are my two favorites that did not happen in the ocean. 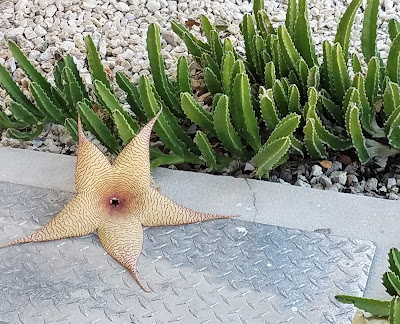 First, I was returning from the dive gear wash station to the condo, when my gaze was snagged by what seemed to be a piece of yellow silk on the ground.  Moving closer, I recognized it as a unique flower springing from a cactus.  Once more the World Wide Web came to my aid to identify it as Stapelia gigantean, a species of flowering plant native to south eastern Africa. In summer, it bears large star-shaped five-petalled flowers up to 25 cm in diameter. The flowers are red and yellow, wrinkled, with a silky texture and fringed with hairs that can be as long as 8 mm.  They have the smell of rotting flesh, in order to attract the flies which pollinate them. The plant is commonly referred to as Zulu giant, carrion plant or toad plant.


Second, Spousal Unit and I were out for a run along the West Bay road.  It was a windy day, and my attention was drawn to the branches of the nearby trees, waving with the force.  At that moment, I spotted a green iguana perched high in the tree.  Once I saw one, I noticed others in the same tree and others like it along the route.  How could I have missed this before? 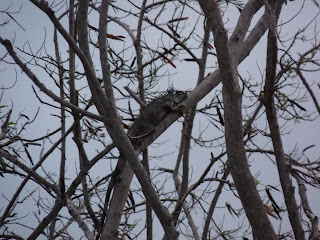 “Above all, watch with glittering eyes the whole world around you.  Because the greatest secrets are always hidden in the most unlikely places.”  Roald Dahl, Charlie and the Chocolate Factory


(The idiom ‘keep your eyes peeled’ appeared in our language as early as the 19th century, but the source is unknown.  The word peel can mean to remove the outer skin of something, such as someone peeling a banana.  People do this in order to open up the fruit, so the message is clear: without physically peeling our eyes, we can endeavor to open them up to the world around us.)