Day 5 - the beauty of North Dakota

Today was a wonderful respite after four days on the road.  Leaving the cats and the bird comfortably ensconced in Number 13 at the Buffalo Gap Guest Ranch we went to explore this stunning slice of North Dakota. 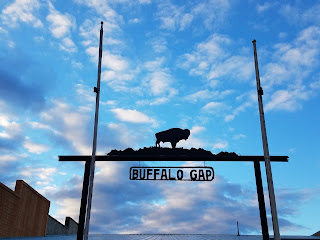 We chose this area as a stopping point due to its proximity to the Theodore Roosevelt National Park, and what a wise move!  From the moment we entered the park, we encountered a wide variety of wildlife and vistas that evoked “Wow” at every curve.  At some point, you just have to stop taking pictures!  Here are a few highlights: 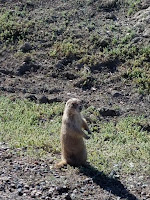 Prairie dog towns dot the landscape, and we were lucky to capture this curious fellow close to the road.  At one town, a hawk flew nearby and they all scattered.

We have all heard the story of the decimation of the bison, and the subsequent miracle of their recovery.  This is but one example of the contribution of Teddy Roosevelt.  In the 1880s, Roosevelt witnessed overhunting, overgrazing and other threats to the natural world.  Conservation increasingly became one of his major concerns.  He would surely be gratified to know that through careful management, many animals that nearly became extinct are once again living here. 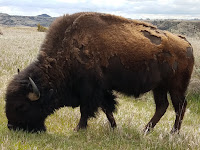 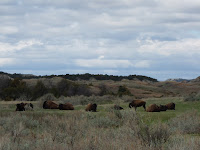 We were also astonished to see groups of wild horses; we saw four different bands in distinct parts of the park. 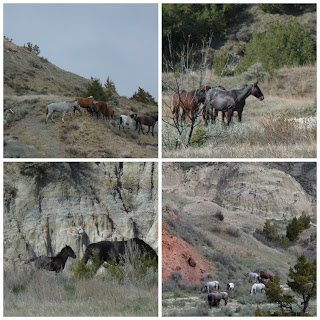 Although we did not get pictures, we also spotted mountain bluebirds, grouse, pheasant, deer and turkey.

Of course, the scenery was also indescribably beautiful.  360 degree panoramas abound, featuring the broken topography that characterizes the Badlands.  The Little Missouri River winds through the park, playing peekaboo with the cottonwoods that line its shores. 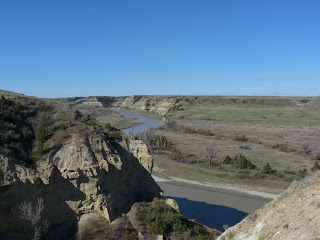 It is still very early spring in these parts, but we did see a few brave flowers along the Maah Daah Hey trail.  Maah Daah Hey is a phrase from the Mandan Indians meaning "an area that has been or will be around for a long time." The Maah Daah Hey Trail is a 144-mile non-motorized single track trail that winds through the Little Missouri National Grasslands in North Dakota's Badlands to form the longest continuous singletrack mountain biking trail in America. 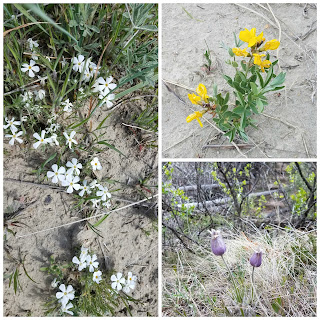 "I have always said I never would have been President if it had not been for my experiences in North Dakota."  Theodore Roosevelt, 1918 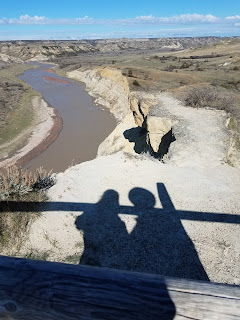