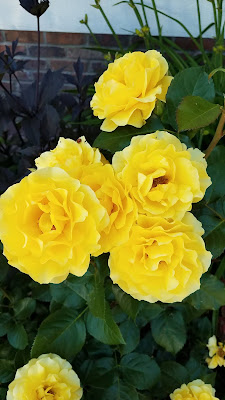 What does summer in America evoke for you?  Perhaps family vacations.  Perhaps warm, lazy days with nothing better to do than dip your toes in the kiddie paddling pool.  Most certainly the Fourth of July and fireworks.

ONE: Visiting a National Park.  On July 2, we cruised the iconic Going to the Sun Road in Glacier National Park with my in-laws.  As many of you know from previous posts, most of this road is closed over the winter due to deep snow.  This year, the road opened to vehicles on June 23.  So, in early July, snow is still abundant above 6,000 feet, and you brace yourself for the brisk temperatures.

None of it was enough to discourage my 79-year-old father-in-law, engaged in the challenge of hiking 1.5 miles one-way to Hidden Lake Overlook, on a trail almost completely obscured by snow.  We made it, and then faced the test of the slight downhill slope on the return.  I wonder at the miracle that neither one of us ended up on our behinds!!!

Note: if you read my Savoring September post, you know that we took our former neighbors on this same trail on September 28.   That post shows the first signs of snow and rime on the trail.  Just 10 days later, due to continued winter weather, the Park closed the Going to the Sun Road.  We have come full circle!

TWO: Going to a fireworks display.  The town of Whitefish launches its fireworks from a barge in the center of its eponymous lake.  Angling for the best view, boats of all shapes and sizes put-put carefully around each other before dropping anchor.  (My mother-in-law fretted over a mama duck and several ducklings, that paddled this way and that, seemingly confused by the traffic.  Ultimately, they disappeared in the direction of the lake's outlet into Whitefish River.)  Stand-up paddleboards inch into the open spaces.  Crowds build at the beach, blanketing every square inch as the sun sinks behind Lion Mountain.  You can feel the anticipation growing, until suddenly the first 'whoosh' is heard out on the water, and the crowd answers back ; "OOH, AAH."  It has begun. 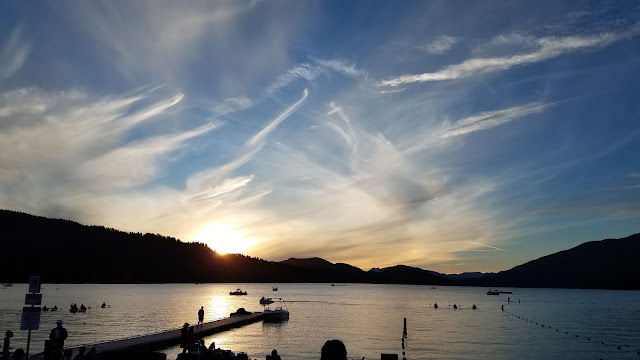 THREE: Small-town glories.  I adore small towns.  They have character.  A slower pace.  A size you can wrap your arms around.  And often, in the summer, bountiful flowers.  Such is Bigfork, nestled in an elbow of the Swan River.

We sauntered along the Swan River nature trail, and noshed on picnic nibbles, before heading to Electric Avenue (yes, that's the name of its main street!) for a peek in the shops.

In my case, my attention was drawn to the riot of color in the beds and baskets maintained by the retail establishments.  You can market yourself on the Web and social media, but sometimes your best 'advertising' is right outside your shop's doors - what attracts you to enter a store that is new to you? 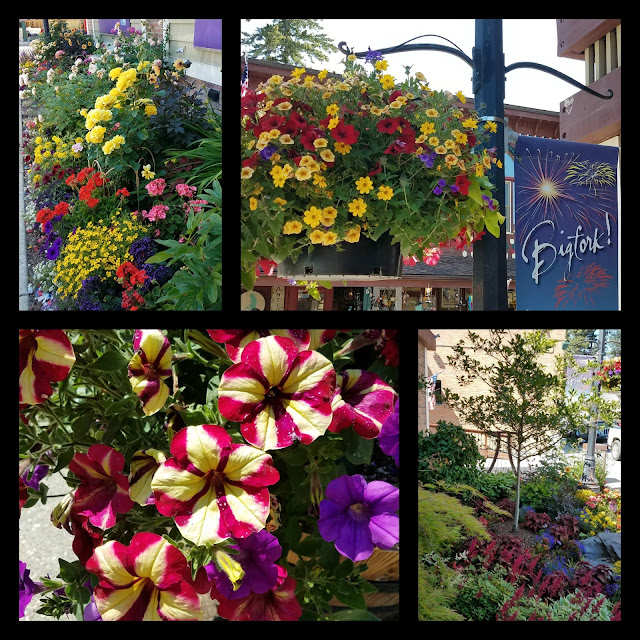 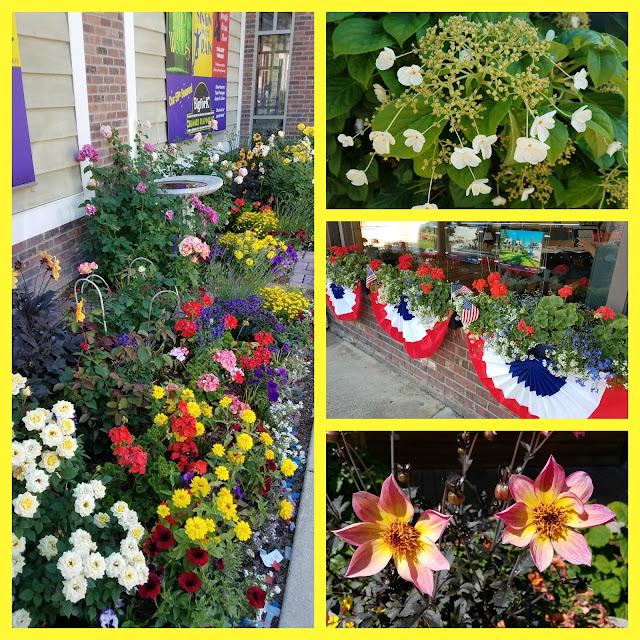 FOUR:  A family hike (with gondola).  With gondola, you ask?  Well, in the summer, Whitefish Mountain Resort operates Chair One with conventional chairs, small gondolas, and equipment especially designed to transport mountain bikes.  It benefits the hikers and bikers who prefer to traverse the mountain one-way (downhill!!!)  So, on a warm July day (only four days after our visit to the summit of Big Mountain (6,817 feet), you have a 360-degree view of alpine splendor: the Flathead Valley and long-distance views of Glacier National Park and the Canadian Rockies, not to mention the Bob Marshall, Great Bear, Scapegoat and Cabinet wilderness areas.  When you can finally drag yourself from the vista, the Danny On trail takes 3.8 miles to wind its way back to the ski village.

In early July, the mountain is awash with glacier lilies, lupines and other spring wildflowers.

The trail plays peek-a-boo with the views, as it passes among stands of old-growth forest, or dips into a chute between the hills.  For Spousal Unit and me, it was entertaining to see the mountain in this context, now that we have experienced a season of skiing/riding these slopes.  You can imagine that much of it looks different now that it has been freed from 33 feet worth of snowfall … 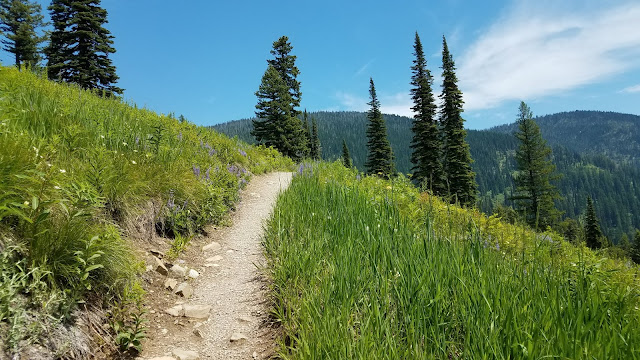 The Danny On Trail was dedicated as a memorial to Danny On, a Forest Service ecologist and renowned nature photographer, conservationist and avid skier on Big Mountain.  Danny generously gave his time to teach novices about nature, photography, skiing and forestry.  Danny died at the age of 55 in a skiing accident on Big Mountain.

Perhaps this is a reminder to each of us to make the most of every day, especially on the simplest of traditions.

Wednesday Around the World

Willy Nilly Friday
Posted by Angie at 9:41 AM