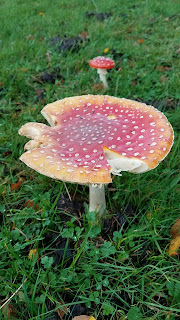 Walking the public footpaths of the UK has to be one of my favorite activities on Earth.  Idyllic topography.  The flora and fauna.  An occasional pub for an adult beverage.  Dry stone walls.  It brings back memories of the first walks with my husband-to-be, when we discovered a shared passion for hiking and the outdoors.  Be still, my heart!

So, of course, on our recent visit to the UK in October/November, we managed to squeeze in one walk for just the two of us, somehow sandwiched in between the rampant rain!

We began in Middleton-on-Teesdale, so named for its prime location in the valley where the River Tees snakes its way among banks lined with trees. 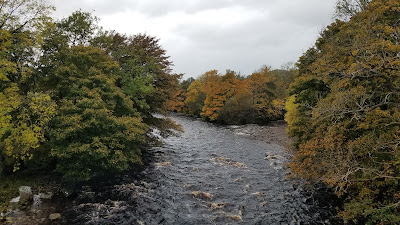 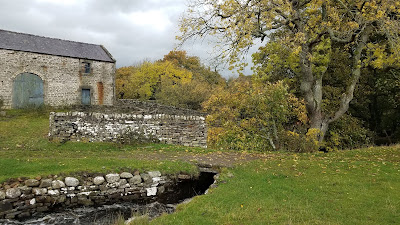 Not too far into our walk, I erupted in laughter when I saw this sign. 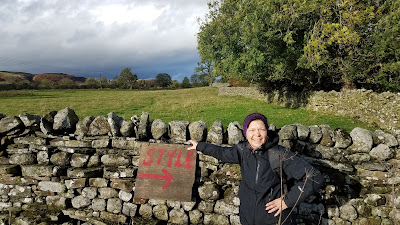 Style (noun): a distinctive appearance
Stile (noun): an arrangement of steps that allows people but not animals to climb over a fence or wall
Below, Spousal Unit is standing on a stile with style.  (Enlarge if you don't believe me!  LOL!) 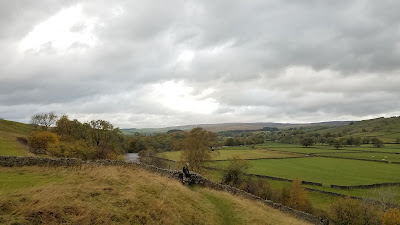 Along the path (can you see it in the picture below, hugging the left side of the wall?) our passing disturbed groups of pheasants, both male and female.  Did you know?  A brace of pheasants is a pair.  A brood is a family group.  A group of pheasants may be known as a flock or a bouquet.  A large group is a nye or nide. 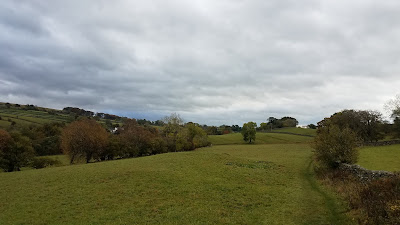 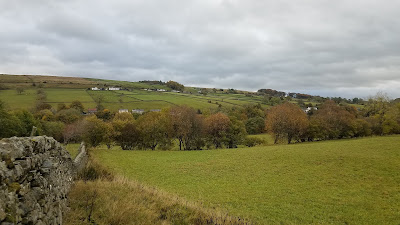 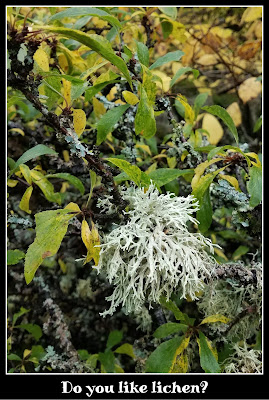 I don't think I have seen as many pheasants on one outing as we saw at various points on this day.  We were also blessed to glimpse not one but two weasels within an hour of each other.  Each one scampered into a hole below a stone wall, and how I longed to linger and see if it emerged!
At times, the footpath followed the banks of the river with military precision.  Then, it would climb the foothills, offering spectacular vistas of the river and fields beyond. 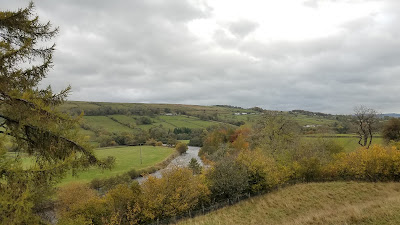 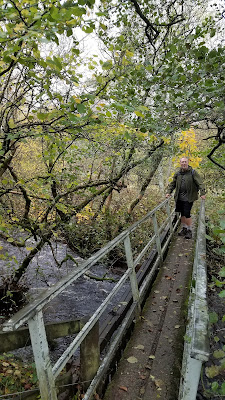 Several tributaries flowed down the hill and into the river.  We were thankful for this bridge to cross one of the larger ones.  Near here, we had to jump across a swollen creek!
The video below shows the high water level of the river itself.
As we approached our turnaround point, a rock escarpment known as the Holwick Scars jutted up into the gathering clouds.  How would you like to have this in your back yard? 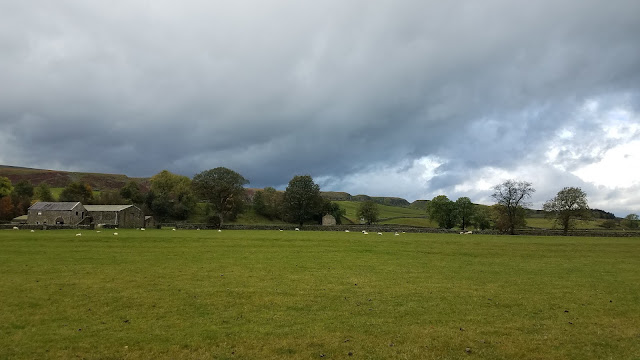 Suddenly, we came upon an area bedecked with Fly Agaric, a beautiful and photogenic mushroom, despite its toxicity.  Maybe they are always in this area, or maybe it was a function of the extra rainfall.  Never mind the reason - I was entranced! 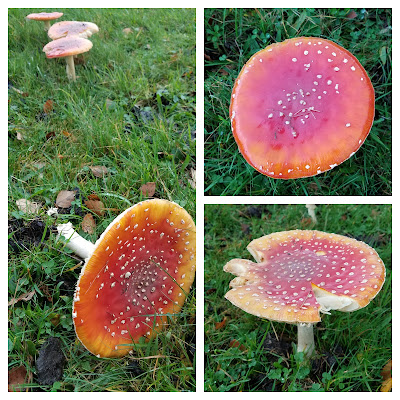 Have you ever noticed that, once you see something, your eye is attuned to it and in a flash, you see more of it everywhere?  Check out these other mushrooms. 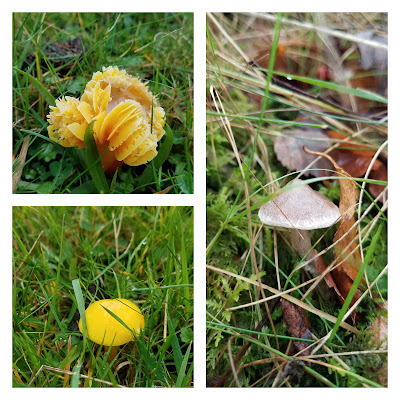 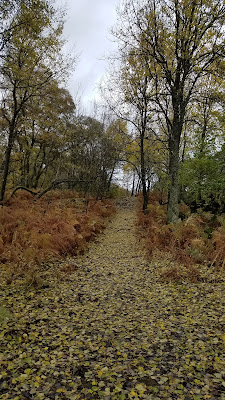 At this point, we entered Moor House - Upper Teesdale National Nature Preserve.  One of the largest in England, the Preserve covers some 88 square kilometers of special upland habitats.  It is Britain's leading site for research into the effects of a changing climate on the natural environment. 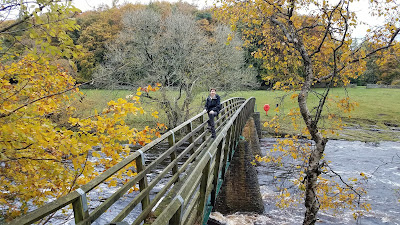 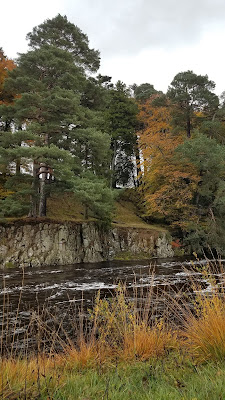 The reserve is famous for its unique Arctic-Alpine plants which have survived here since the last Ice Age and are today conserved by traditional farming and moorland management.

Our turning point was Low Force, a waterfall that tumbles over the Whin Sill, a layer of hard rock called dolerite, known locally as whinstone.  The Whin Sill formed 295 million years ago, when molten rock rose up from within the Earth and spread out between layers of limestone, sandstone and shale.  The molten rock cooled and hardened underground to form a vast sheet of rock known as a "sill".  Millions of years of erosion have exposed the Whin Sill at the surface here at Low Force.  (The Holwick Scars are also part of the Whin Sill.) 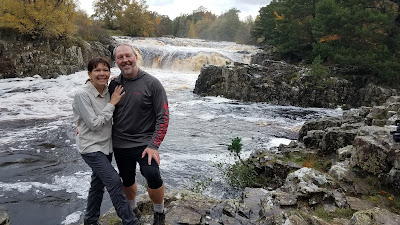 The still photo does not do the waterfall justice - check out the two videos!

On the way back, we sped up a little, in light of the heavy clouds overhead.  Good thing, too, or we might have been out in the heavy downpour for longer!  Just before the heavens opened, I managed a final shot of Holwick Scars - even more majestic from this vantage point! 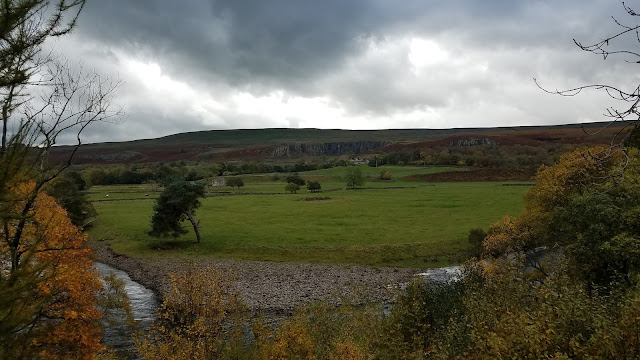