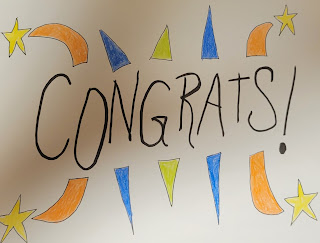 Last week, we helped #1 Son move from Montana to Idaho Falls as he prepared to start his new job on January 17.  Of course, we were sad to say goodbye, but it was also a joyful moment given that his job search took over a year, and he waited for his security clearance for 5 months!  On December 21, the day he was told about his clearance and his start date, I made several signs that were waiting for him when he returned home from his temporary job at the burger joint. 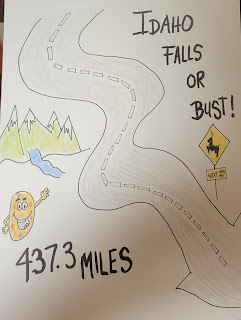 I mobbed him as he came through the door; the long wait was over!
The intervening three weeks flew past, full of anticipation and the myriad of details that accompany a move and a new job.  Back in Fall 2020, Spousal Unit and #1 Son enjoyed a cross-country road trip to complete the relocation from Ohio to Montana; all of #1 Son's belongings fit securely in the back of his Toyota Rav (well, actually, some he left at the home of one of his aunts!)  This time, we gave him a starter kit of items for his apartment, and also made sure he took with him possessions that we have been storing for years (I lost count of how many Lego sets we had!) 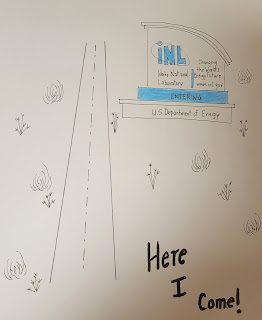 The entry of the house was stacked with boxes, and the last morning I eyed it with some skepticism.  But the boys managed to fit all of it into the Toyota Rav or my Toyota 4Runner.    We were ready early, but #1 Son had an appointment for a booster, so we waited until the appropriate time.  And would my car start?  No!  And could #1 Son turn around and come back?  No - he had to make his appointment.  We had just enough room to pull Spousal Unit's rig out of the garage and give me a jump.  Whew!  I suppose it was good to get that out of the way - the rest of the trip was uneventful.

We were blessed with good weather (only one big patch of dense fog near Missoula) and the drive went quickly.

As part of his benefits package, #1 Son receives temporary living until his apartment is available on February 8.  He checked into the Candlewood Suites (we had also booked a room there for one evening) and we promptly started ferrying boxes from the vehicles to his room.  We made no attempt to organize anything - it was already late and everyone wanted food and beverages!!!
After dinner, the booster started to kick in (headache, fever), and we were also weary from the drive.  So we bid each other goodnight, with a plan to touch base in the morning.
#1 Son was still dragging in the morning, so Spousal Unit went shopping for him - just a basic shop to get him started.  And then it was the moment we had been dreading - the good-bye!!!  But I managed to get through it - partly because we know we will be seeing him again in February!!!  We have a ski trip/visit with my brother and his wife in Utah planned for late February, and we will visit #1 Son on the way down and back for one night each.  How cool is that?  And by then he will be in his new apartment, so we will get to see him in his native habitat!!!! 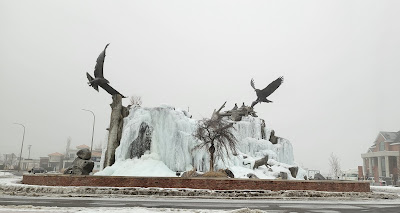 On the way out of town, we passed the Giant Eagle Waterfall Nest sculpture.  Unlike most city fountains, this one is left running in the winter to create the magical ice sculpture effect.  I am thrilled for #1 Son that he has a whole new town to explore, experience and make his own.
Maybe it was a sign that, on the drive home, we saw at least 50 raptors (hawks, eagles, kestrels).

The house feels vacant now; we are re-experiencing the empty nest syndrome all over again.  No late-night shouting from downstairs while he plays video games with friends across the globe.  No creaking floor boards from upstairs when he retires to bed.  No headlights sweeping the driveway when he returns from town.  He did leave me a box of photos and knick-knacks he did not plan to take to Idaho Falls - going through it today, I came across this cross-stitch my Mom made to celebrate his birth.  The star was born, and the star has been launched! 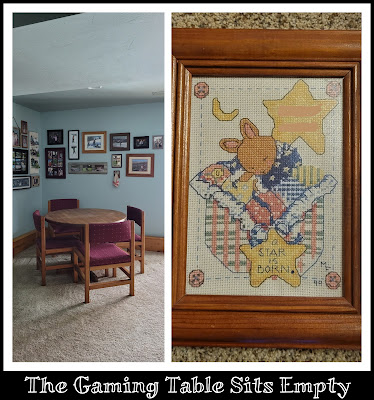