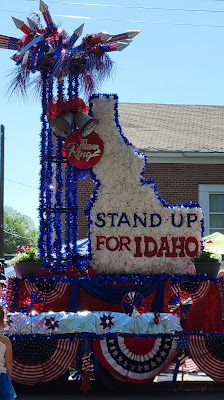 Is anyone else around here in shock that it's already AUGUST???  Since I am deep in denial, this post is re-winding to our Fourth of July weekend with #1 Son in Idaho Falls.  Between classic patriotic events such as the parade and fireworks, plus typical tourist attractions (the Zoo!), we were on the go, go, go. And the time spent with #1 Son was the cherry on the sundae!
Given Friday was his day off, we drove down on Thursday, and were greeted by the newest members of our family, Daisy and Ruby.  #1 Son has been dying to have cats.  Once he secured his job and his own apartment, he was ready.  He waited until after our family trip to Cayman (but even in Cayman I was helping him scour the 'net for cat trees and other products), and by then he had identified two adoption candidates at a nearby shelter.  He was so thrilled they were still available when he went for his appointment! 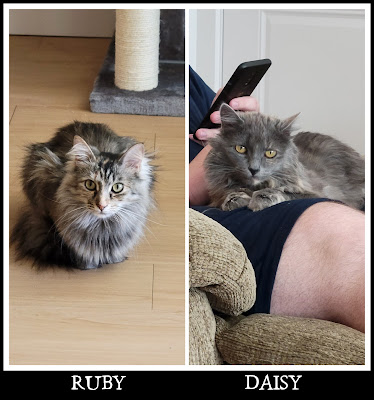 We parted with the girls just long enough for a little outdoor dining at Smokin' Fins. 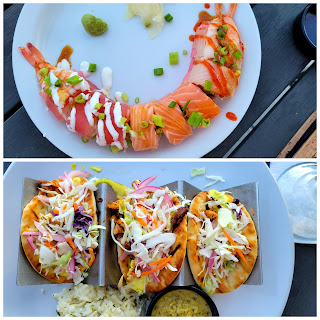 In the past, I have written posts about the love that #1 Son and I have for museums.  We were delighted to find that the Museum of Idaho was hosting the "Genghis Khan: Conquest and Culture" exhibit - bingo!  #1 Son has a particular interest in all things Asian.  Friday morning we headed to this display, showcasing more than 300 original artifacts including ancient weapons, jewelry and domestic items. 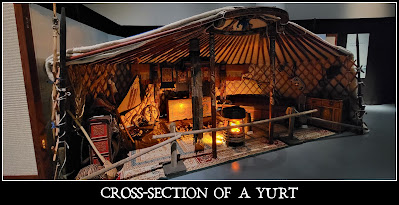 The exhibit presented multiple facets of Genghis Khan, including his unprecedented leadership capability, even if some of his practices might be considered barbaric by today's standards.  Being a Mongol meant being a warrior, but Genghis Khan turned individual warriors into an army.  He also incorporated defeated soldiers, mixing them in with his troops to help ensure individual loyalty.  To facilitate discipline and provide a clear chain of command, the troops were organized by tens.  The ten men in the basic unit were responsible for each other - if one failed, all were punished.  An imperial guard served the Khan.  To be selected was considered a great honor - it was the military academy for the next generation of elite leaders.  Each young officer-in-training, chosen from the sons of regimental leaders, was also a kind of hostage, guaranteeing the fathers' loyalty to the Khan.

The morin khur (horse-head fiddle) is the national instrument of Mongolia.  In Genghis Khan's time, every man was expected to know how to play it.  (see left side of collage below)  While at the museum, a gentleman was playing a horse-head fiddle, sometimes accompanied by a woman on a dulcimer-like instrument. 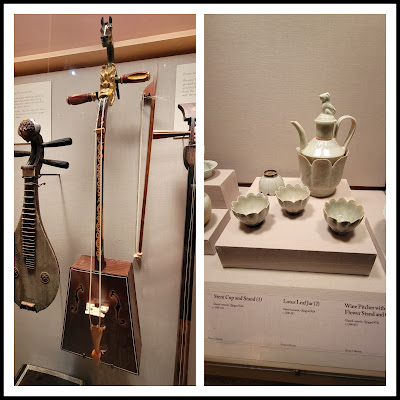 At its peak, the Mongol Empire revived and controlled the "Silk Routes" that united Asia with Europe.  That control meant more than just access to essential supplies and tariffs to support the Empire.  It also allowed Genghis Khan to spread innovations between cultures.  Many features of modern Western life were brought from the East by Genghis Khan and the Mongol Empire.  Genghis introduced the concept of the printing press, diplomatic immunity, the pony express and the use of passports.  These innovations sped transit and safeguarded trade across his vast Empire.  The next time you eat a hamburger, put on your pants, shout "Hooray" or play the violin, remember to thank Genghis Khan!
You can click on the photo below to enlarge it and read more about these cultural contributions. 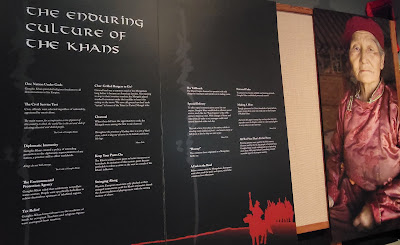 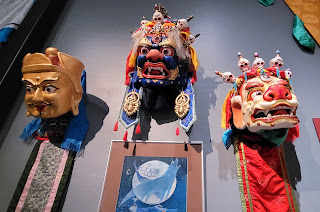 These papier mache masks are among 108 fashioned by dozens of Mongolian artisans under the direction of the exhibit curator.  The Tsam Dance is an elaborate ritual performance of masked dancers performed on the 9th day of the last month of summer.  The dancing figures represent the demons which protect the soul after death in the journey to rebirth.
Tsam was banned during the 20th Century Russian domination of Mongolia.  These masks were worn in the first public performance of the Buddhist Tsam Festival after Mongolia won independence from the Soviet Union in 1990.

We went searching for some lunch in downtown Idaho Falls, and along the way I saw these two murals.

And our day was not over yet; the Zoo was holding an evening fundraiser with live music and access to all the normal exhibits.  Given the cooler evening temperatures, many of the animals were lively.  Check out the video of the Serval.
These cats are just a LITTLE bigger than the kitties back at the apartment.  And yes, I only took pictures of cats ... 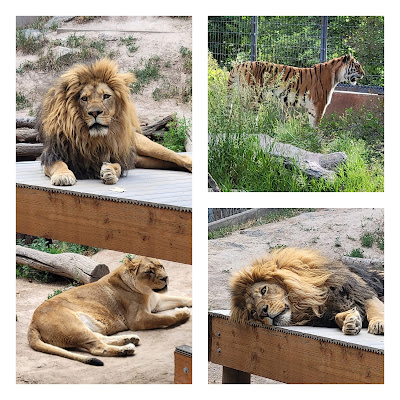 The next day, we went to the Farmer's Market.  I was fascinated by these Chimney Cakes, which I had never seen before.  Labeled as "Transylvanian Treats", the batter was slathered on the skewers and baked over a charcoal fire.  When done, the skewers "rested" upright on the table, and then your selected coating (cinnamon sugar was popular) was applied.  Final step was to bang the skewer on the table, and the cake would magically slide off into the bag.  Voila!  Too bad I closed my eyes for the photo! 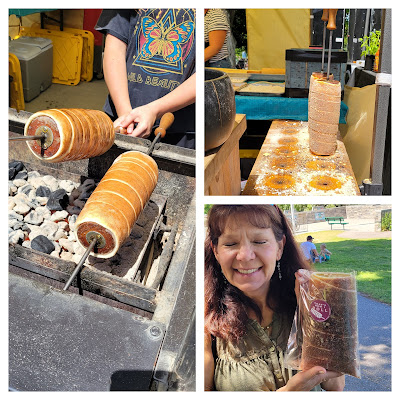 That afternoon, we took a break from the heat and went to the movies - have you see the Elvis movie with Austin Butler and Tom Hanks?  A terrific film - even though it was hard to watch Tom Hanks in a "bad guy" role! 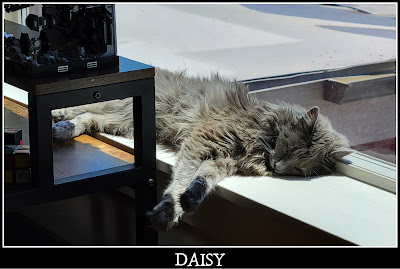 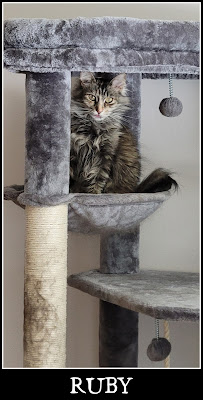 On Sunday, we went to church and had a lazy afternoon (more time with the cats!) before an evening baseball game.  The Idaho Falls Chukars are an independent baseball team of the Pioneer League, which is not affiliated with Major League Baseball but is an MLB Partner League.  What is more American than hot dogs, popcorn and baseball for the Fourth? 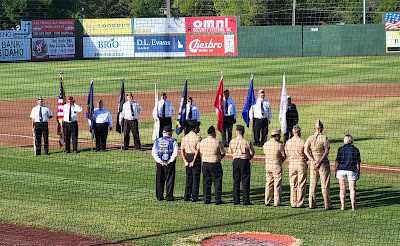 And then it was the Fourth!  We began our day early, staking out a spot to watch the Parade, which began at 9 am.  The theme was "Let Freedom Ring".

There were several "cheer" floats, and all of them had the cheerleaders on these boxes - didn't seem too safe if the trailer needed to stop suddenly.

We are partial to marching bands since #1 Son was in his high school marching band all through high school.  If you are similarly inclined, here is one video for you.
And I know #1 Daughter would love this VW bus.

Idaho Falls is home to the Melaleuca Freedom Celebration, the largest Independence Day fireworks show west of the Mississippi River.  Leading up to the 10 p.m. "high-flying, ground-shaking, adrenaline-filled display", the Snake River Landing venue is home to live music, a massive Kids Zone (I have never seen so many bouncy houses in one place), and a plethora of food and beverage vendors. As chance would have it, #1 Son's apartment is within 5 minutes' walk of the venue!  We alternated between the venue and the pool at his apartment complex - it was HOT.  We wondered how the cats would deal with the booming noise of the pyrotechnics, but when we returned to the apartment close to 11 p.m., they did not seem distressed.
And then, as quickly as it started, the weekend was over.  #1 Son leaves quite early for work, so we left at the same time.  The Idaho sunrise greeted us as we navigated northward on the mostly empty highway.  We were thrilled to have this time with #1 Son, and to see him so content in his home.

"I hope you realize that every day is a fresh start for you.  That every sunrise is a new chapter in your life waiting to be written."  Juansen Dizon