Trips to the UK are not complete without at least one castle, so here you go!  Around 1300, Sir John de Broughton, a knight of King Edward I, built his manor house in a sheltered site at the junction of three streams and surrounded it with a substantial moat.  The greater part of his house and the moat remain today.

William of Wykeham, Bishop of Winchester and Chancellor of England, bought the house in 1377, and since then it has been in the continuous ownership of the same family.

Sir Thomas Wykeham obtained a license to "crenellate and embattle" in 1406; he added the battlement walls to the gatehouse, thus giving the medieval house a military appearance.  These changes allowed the manor house to be called a castle.  Hey honey, can we crenellate and embattle the log house? 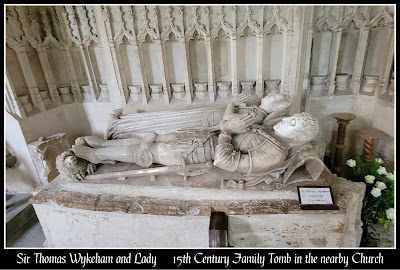 We had a specific time to tour the castle; having arrived early, we invested the time in walking the grounds.  This flower was blooming in the high grass - it was new to me and I loved the unique texture.  Can you see what look like scales or a checkered pattern?  I learned later in the week that this is called Snake's Head Fritillary.  Most often it is purple, but it sometimes appears in white, as you can see in the collage below. 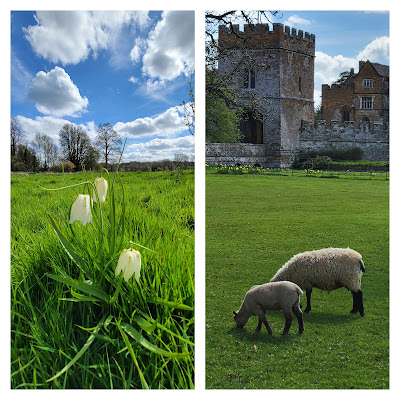 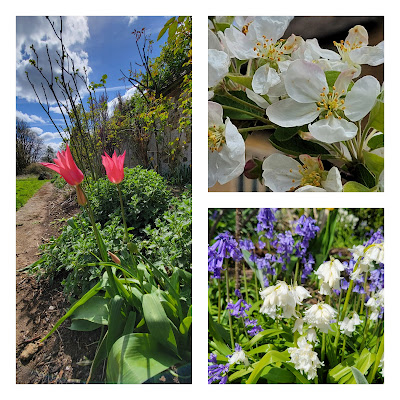 Even with the rationed tour times, the number of visitors made it difficult to take pictures.  Fortunately, my in-laws bought a pamphlet about the house, and I have it to remember the visit.  My pictures, on the other hand, focused on 'artsy' elements of interest to me! 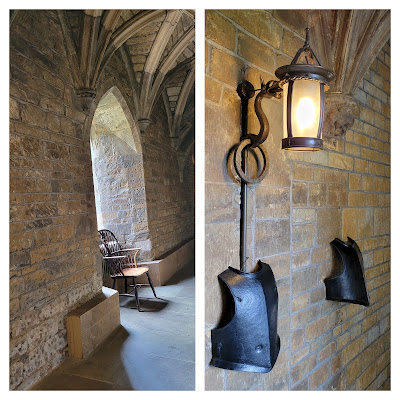 The chapel was not a room open to visitors, but you could take pictures of the stained glass through a squint in the north-east corner of Queen Anne's Room.  The East Window contains stained glass from the 14th, 15th and 16th centuries, set in a 1994 window by Alfred Fisher.  The chapel is a rare example of a 14th century private chapel.  The fixed stone altar slab supported on three solid brackets and the encaustic tiles on the floor are all of the original date.

The embroidered pillow below was in the Gallery, remodelled in the Gothic style in the 1760's and redecorated in 1970.  The gallery contains family portraits from the late 16th Century through to Geoffrey, the 18th Lord Saye & Sele who died in 1937.

The unusual compound title of Saye and Sele dates from the original creation of the Baronry in 1447.  It is partly personal, from the connection with the family's French ancestors in Normandy, the Lords Say.  It is also territorial through the ownership of the land at Seal (now on the outskirts of Sevenoaks) in Kent.  (Not sure why the modern-day spelling is Sele rather than Seal ...) 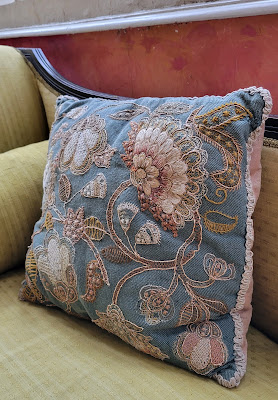 I was fascinated by the Bury Lodge Room.  The wallpaper is by Zuber of Alsace and dates from 1840.  The furniture is largely from Bury Lodge, Hambledon, Hampshire, the home of the 21st Lord Saye and Sele's maternal grandparents.  Just look at this embroidery on the bedcover! 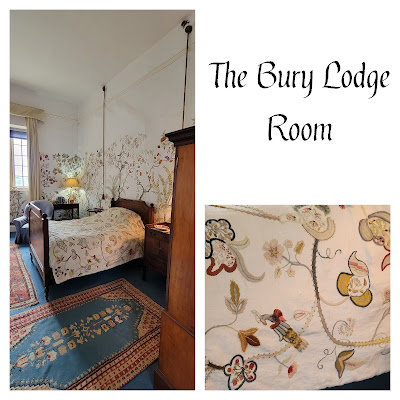 Writing of needlework - this table cover, the work of Caroline Twisleton in 1849, traces the history of the Saye & Sele family in panels of needlepoint. 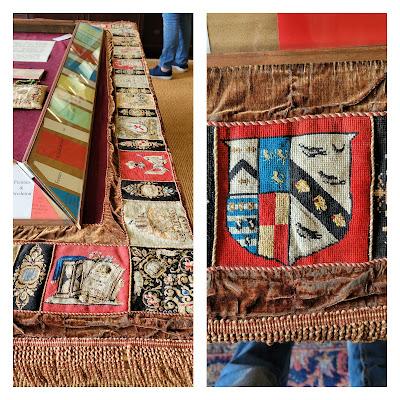 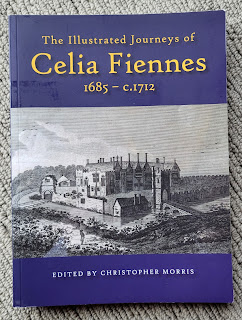 One of the side rooms had a display about Celia Fiennes (1662 - 1741).  Celia rode side-saddle through every county in England in the late 1690's - enterprising journeys at a time of highwaymen and mud-tracks for roads.  Her diaries about her excursions have become an important source of information for historians looking at life in England in this period.  In the gift shop, I bought a book that contains her diaries.

You may be wondering if there is any connection between Celia Fiennes and the well-known actor Ralph Fiennes (The English Patient, Schindler's List, Harry Potter films and James Bond films).  Why yes!  Ralph, and his brother Joseph (also an actor), as well as the explorer Sir Ranulph Fiennes are directly descended from Frederick, 16th Lord Saye & Sele.

As usual, I was the last one to finish exploring the castle, and not seeing any of my party, I hastened to the gift shop.  Not one of them in sight.  Hmmm .... where could they be?  I made my purchase and headed back to the castle.  I found them rounding one corner, and quickly learned that I had missed a staircase to the roof.  I snuck back in and climbed the stairs.  Totally worth it!

To the right is the Ladies Garden installed by Lady Algernon Gordon-Lennox in the late 1890s.  In 1895, the Gordon-Lennox family rented the Castle from John, 17th Lord Saye & Sele, and stayed for 17 years.

The castle has had its ups and downs over the years.  William Thomas, 15th Lord Saye & Selem engaged in a life of frivolity and extravagance that resulted in a twelve-day sale, disposing of the bulk of the contents in the castle.  The last items sold?  The swans on the moat.

Within a stone's throw of the gatehouse lies the parish church of St. Mary Broughton.  The church built by Sir John de Broughton is largely early 14th Century, although a 12th Century font in the church may be a survivor from an earlier building.
"Broughton ... the most beautiful of houses, medieval in a 16th century shell with Gothick additions, entered across a moat and through a gatehouse, almost a standard kit for an idyll.  There's a formal garden, great plush borders along the old ramparts and cows and sheep grazing in the water meadows beyond, overlooking all this rambling honey-coloured house ... as magical inside as out, handsome rooms lined with linenfold paneling and a splendid drawing room overlooking the moat.  My wonder at the place makes me foolish and I'm sure I gush .."  Alan Bennett, Writing Home, 1996 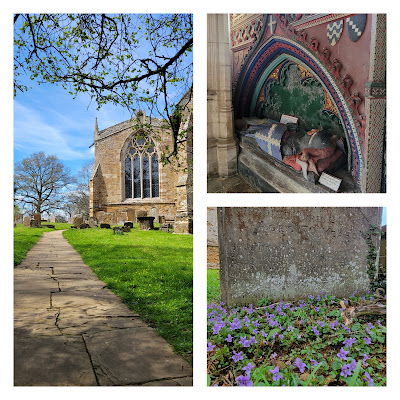