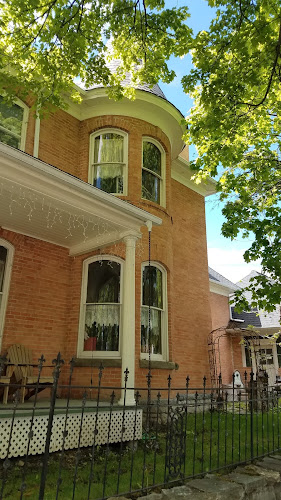 Do you dream of a vintage* home?  Maybe you are living in one!  In my April 1 post, I wrote about the East Side Historic District in Kalispell.  74 buildings, mostly homes, form the district and can be easily identified by the plaques with a detailed history of the building.  Back in May 2019, with some spare time on my hands, I photographed nine of these homes.  Finally, they make it to a post.
The picture to the left and the one below are the Warren A. Conrad/Noffsinger Residence.  Described by the Flathead Herald-Journal as "an elegant mansion" in the "colonial style," this mansion's overall symmetry and small gabled front dormers are typical Colonial Revival.  However, the two-story turret, elaborate stained-glass windows, and wraparound porch (reconstructed in 2003 from historic photos) reflect the popular Queen Anne style.  Such architectural combinations were common around the turn of the century.  Rancher and businessman J.L. Cox planned and supervised construction of the two-story brick home in 1894, but he and his wife lived here only briefly.  In 1896 Warren Ashby Conrad purchased the residence for his bride, Caroline, whom he met when a nationwide railroad strike stranded her in Kalispell.  Ashby - younger brother of Charles and William Conrad - was an officer of the Conrad National Bank.  After Ashby's death in 1922, Caroline rented the home to tenants, including Lelia Brown, who used it as a base to explore Glacier.  In 1929 George Noffsinger, manager of the Glacier National Park Saddle Horse Company, purchased the residence, where members of the Noffsinger family continued to reside until 1944. 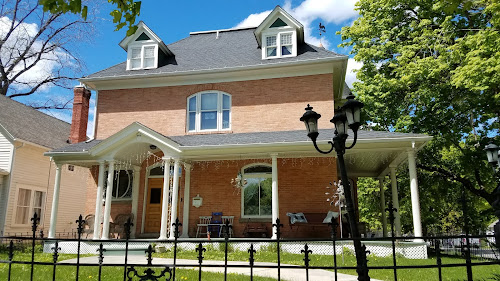 Self-styled capitalist Olaf Peterson and his wife Johanna, both Swedish immigrants, built this sturdy two-story home circa 1896 (the Peterson House).  It was the first home constructed on the block.  While other neighborhood homes are of frame construction, this residence is of brick.  Oddly, several of its former owners were in the timber business.  Timber dealer George Millet purchased the home from the Petersons in 1908.  Pacific Northwest lumberman Julius Neils of Portland was the next owner.  Neils sent his son-in-law Harry Schocknecht to Kalispell to establish lumberyards in Montana.  The Schocknects occupied the home until 1915.  Logging contractor Thomas Gardner and his family were residents during the 1920s.  Dr. Ralph Towne and his wife, Marie, made their home here from 1936 to 1967.  The home then served as parish house for the nearby Trinity Lutheran Church.  At some time in its more recent history preeminent Kalispell architect Fred Brinkman designed the newer windows but the nineteenth-century residence retains much of its historic fabric.  A complex plan and orange-red brick softened by mature landscaping make this a distinctive neighborhood landmark. 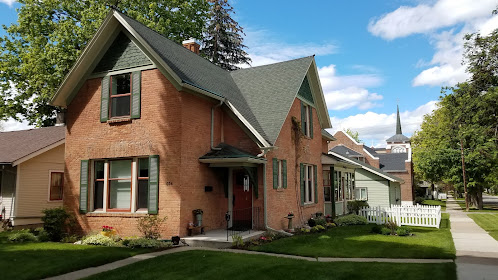 Founded in 1891 by the Great Northern Railway, Kalispell boasted 651 residents in its first year, growing to 2,500 people by 1900.  Confident of finding tenants in the booming community, bricklayer John Lundberg built a one-and-a-half story duplex on this lot in the early 1890s (now called 504 Fourth Avenue East).  Possibly the first brick residence in the city, the solid-looking structure featured patterned shingles in its gable ends and a wraparound porch. Lundberg placed the kitchens in the rear under separate roof, a common practice in the nineteenth century to minimize fire risk.  The side-gabled duplex saw five different owners between 1894 and 1920 and provided comfortable accommodations to a number of tenants, including the families of a plumber, a saloonkeeper, a carpenter and a letter carrier.  Margaret Bjorneby owned the building between 1920 and 1928, during which time she converted it into a five-bedroom, two-bathroom single-family home.  Bjorneby sold the home to Elizabeth Hilton, who lived here with her husband Earl, owner of the Glacier Dairy, into the 1940s. 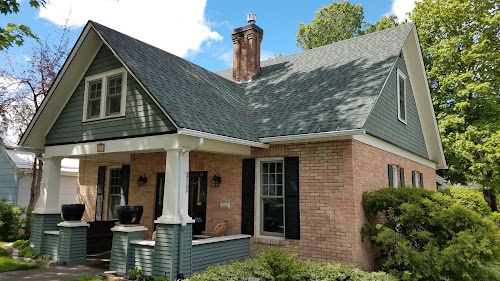 Kalispell was only two years old when German immigrant Louise Sels and her son Ed had this cross-gabled Queen Anne style residence built in 1892, a year that saw over a hundred homes built in the new town.  Louise Sels soon sold the house to her son-in-law Arthur Burnes, but according to the 1900 census, she continued to live in the home with her extended family.  The household included her three grown children, granddaughter, son-in-law, and his mother.  Josephine Richards and Ella Bell owned the house between 1902 and 1905, renting out "nice large front rooms" to gentlemen.  The distinctive horse-shoe shaped porch was added between 1903 and 1907.  The home's longest occupant, Maude Drew, lived here between 1905 and her death in 1959 at age 89.  A year after she and her husband George bought the house in 1905 they installed a brick sidewalk.  The local newspaper lauded the improvement over the standard wood sidewalks and predicted "Other property owners will note the manner in which the walk wears with much interest." (named the George Drew Residence) 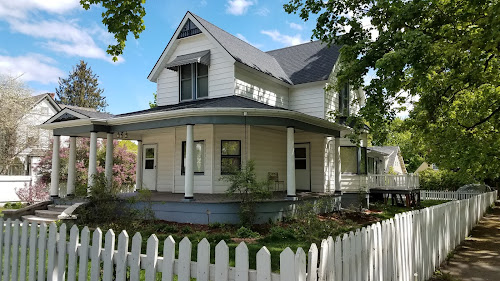 This beautiful gable-front-and-wing residence, built for newlyweds John and Sophie McIntosh, captures the best of the exuberant 1890s with a wealth of Queen Anne details.  The Flathead Herald-Journal declared upon its completion in 1894 that the marvelous home rivaled Kalispell's best in "style, finish and comfort."  Set atop a natural rise dubbed "Knob Hill," the newspaper went on to comment that its owner would thus occupy "the most exalted position in Kalispell."  Finely-crafted details including fishscale shingles, wavy clapboard, a sunray pattern and elaborate stained-glass parlor transoms embellish the canted, or "beveled," front gable.  McIntosh had a varied and successful career in Kalispell, selling everything from hardware to pianos to automobiles.  His opera house, built in 1896, was the town's longtime cultural center.  Sophie died in 1920 and John McIntosh in 1947, but the home remained in the family until 1979.  (The McIntosh House is the one I featured in my April 1 post.) 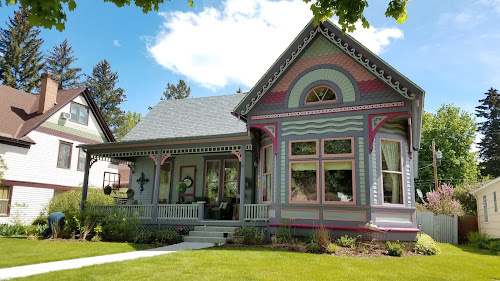 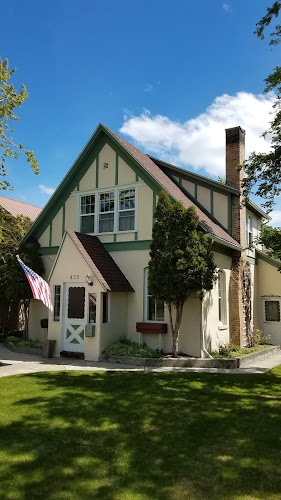 Now a Tudor Revival style home, this residence was originally a brick-clad, hipped-roof foursquare.  Built before 1897, it served as the parsonage for St. Matthew's Catholic Church.  Longtime Kalispell priest Francis O'Farrell resided here between 1907 and 1925, while overseeing construction of a Catholic hospital, parochial school and grand brick church five blocks west.  In 1926, Fr. O'Farrell moved to West First Street, near the new church.  Between 1928 and 1937, Emil and Margaret Bjorneby made their home here.  Emil arrived in Kalispell in 1895, working at various occupations before founding a flour mill with his brother George.  Before the Bjornebys moved in, renovations modernized the look, and more than doubled the residence's living space.  To transform the foursquare into a fashionable Tudor, skilled contractors covered the brick with stucco and added a steeply pitched roof and matching enclosed entryway.  They also incorporated many design elements associated with the Tudor style, including a prominent brick chimney; tall, many-paned windows; and decorative half-timbering in the gable ends.  (referred to as the Catholic Parish/Bjorneby House) (Did you notice this is the second time we have heard about Margaret Bjorneby?  Seems she is always remodeling her house!)
The owner and publisher of the Inter Lake, a weekly newspaper serving the Flathead Valley, was the original owner of this prominent corner residence.  Robert M. Goshorn, his wife Alice and their two children moved into the new home in 1900.  In 1907, their son Joseph, a Stanford University student, drowned along with two other Kalispell youths in a canoeing accident near Seattle.  Robert and Alice Goshorn determined to stay busy converting their weekly publication to a daily newspaper.  They sold the business in 1912, but it remains today the Daily Inter Lake.  Goshorn subsequently served as receiver (under the Taft administration) and as register (under the Harding administration) of the U.S. Land Office at Kalispell.  The couple also maintained a ranch and fruit orchard on Flathead Lake.  Their vintage Kalispell home features bay windows, diamond-shaped window panes, two porches, decorative shinglework and partial shingle cladding, hallmarks of both the Queen Anne and Shingle styles.  A smorgasbord of  surface textures -- clapboard, rough-cut stone, and shingles -- beautifully expresses Victorian-era taste.  Inside, a handsome staircase showcases highly skilled carpentry. (named the Goshorn House) 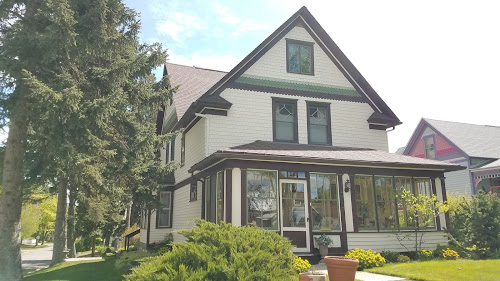 Kalispell contractor Caesar Haverlandt built this vintage home circa 1909 for his brother Charles who owned the property.  In 1911, John H. Graves, an early settler of Flathead Valley, purchased the residence.  Graves was an avid reader and reportedly established the state's first circulating library in Diamond City.  He later served as Flathead County's first assessor and owned the Valley House Hotel.  Dean and Metta King purchased the home in 1918.  King served as a court reporter, county attorney and judge of the 11th Judicial District retiring in 1958 after seventeen years on the bench.  Metta King was prominent in community affairs, including the Montana Federation of Women's Clubs, the Keep Montana Green program, and the Century Club.  This well-preserved Craftsman-style house features exposed rafter tails, front and rear dormers, an engaged partial-width front porch supported by heavy square columns, and elaborate decorative stained-glass windows in the front.  In 1999 the interior and exterior of the residence were completely renovated to the original splendor. (named the King House) 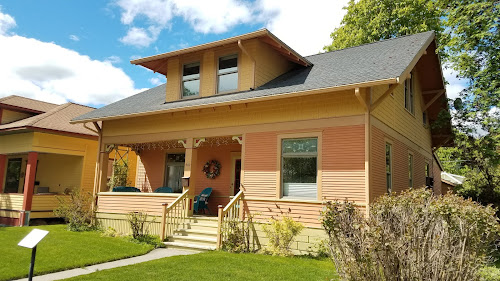 Dr. Albert and Minnie Brassett built this house with money given Minnie as a wedding present by her father.  Constructed in 1911, the comfortable Craftsman-style bungalow reflects the fashions of its day.  Craftsman-style houses abound in Kalispell; this one, designed by local architect Marion Riffo, features a full-length front porch, wide eaves, a flared brick chimney, and a shed dormer.  A well-known physician, Dr. Brassett opened his practice in Kalispell in 1909 and performed the first surgery at Kalispell General Hospital.  He retired in 1954 on his eightieth birthday, having served in some cases as family physician for three generations.  Before buying one of the first automobiles in Kalispell in 1913, Dr. Brassett walked to attend his in-town patients, including those at Kalispell General; the hospital's location two and a half blocks away likely influenced the couple's choice of building site.  The Brassetts raised two children here.  Their long-term residency testifies to the home's fine design: Minnie and Albert both lived here until their deaths, hers in 1952 and his in 1956. (called the Dr. Albert Brassett Residence) 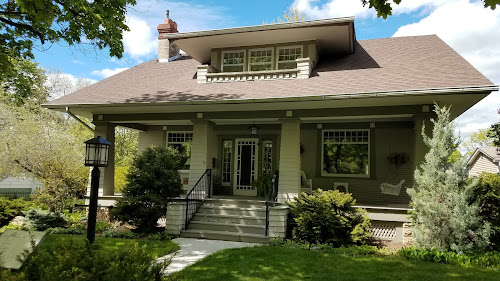 I should thank the Montana Historical Society - I drew the historical information from the plaques at each of the homes.  If I had thought about it earlier (in other words, not on a Saturday and not 20 hours before I am going to publish), I would have called and asked how they "name" the houses.  It appears to correlate with the longest occupants of each residence, but that is not always the case.  Interesting. 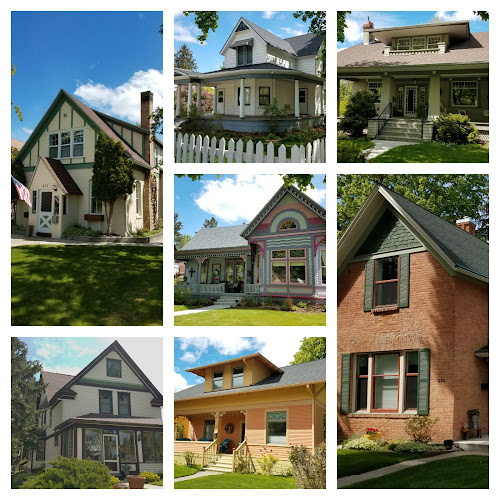 *Just for fun, ask your family and friends how they define "vintage".  Sources on the web defined it as "something from a previous generation" and "between 25 and 100 years old", and suggested that "antique" refers to something that is over 100 years old.   That would make all of these structures antiques!  When I ask Spousal Unit, he laughs.  Being from the UK, he considers anything built in the last 150 years to be modern!!!

Click here to enter
Posted by Angie at 8:58 AM