Mosaic Monday #88: Glory in the Garden 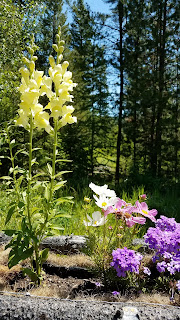 You knew it was only a matter of time (oops, that was last week's post!) guaranteed that I would wax lyrical about my garden again.  Can you believe it has been 8 weeks since my last garden post?  Muchos cambios, mis amigos, so let's take a look!

Overall, I have been pleased with the outcome of my seed planting (7 out of 13 have come up, and 3 of those were sown in the spring).  54%, barely better than "average", may not seem a palatable result, but, given all of the seeds were hand-collected from last year's garden and that this was my first attempt, I am satisfied.  It has already taught me a thing or two about how thickly (or not) to sow the seeds.  As you can see in some of the pictures below, I could have been a little more judicious. 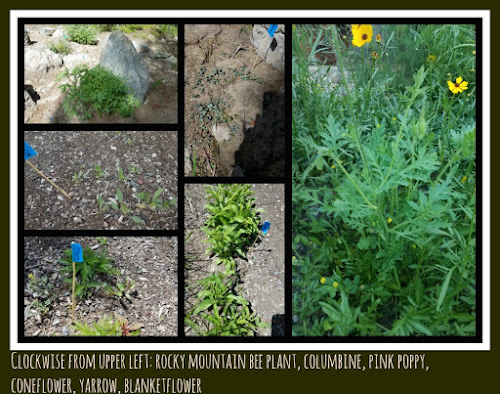 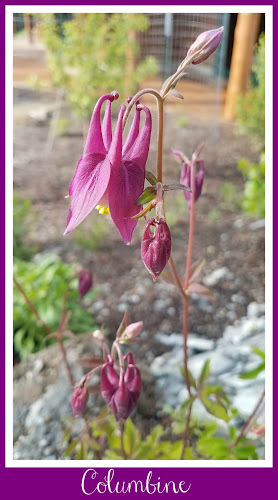 I sowed Rocky Mountain Bee Plant in multiple locations, and although it came up gangbusters in every one, since then only about half of them are thriving.  Last September, I wrote about these plants, which showed up in our "prairie" on their own.  I collected a bunch of seeds, but left the rest, assuming they would sow themselves.  I have not seen a single one in the prairie.  Go figure!  (In the mosaic above, there must be 20 individual plants in that cluster.)  I am thrilled with the number of columbines that have sprouted, especially since this is a seed sown in the spring.  Given this response, I will focus on seeding columbines rather than trying to transplant little ones.  If you are paying attention (!), you may be asking why there are only six pictures in the mosaic, when I said 7 have sprouted.  Good for you! 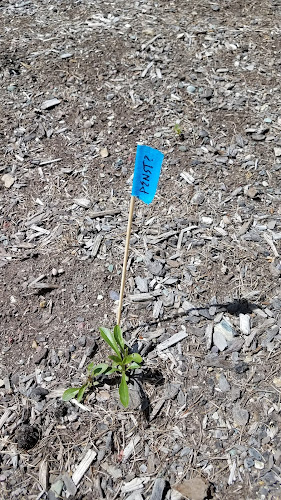 Rocky Mountain Penstemon has also sprouted in half of the locations where it was sowed.  I so admire this hearty plant, and its deep-throated purple flowers, that I am over the moon with this result.  You may also be wondering about the little blue markers you see in the mosaic.  Inquiring minds must be answered!  Three weeks ago, I used these skewer sticks and blue painter’s tape to create little flags denoting sites with emerging plants.  This meant I didn't have to continually reference my seeding plan, and more importantly, prevented me from accidentally "weeding" something I would like to preserve!  (Sometimes, I am not sure, and the flag merits a question mark!!!  I am now pretty confident this is a Rocky Mountain Penstemon - time to update the flag.) 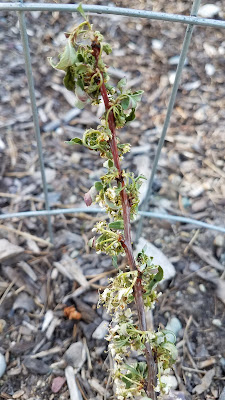 When we first installed our landscaping in 2018, I built a relationship with the Center for Native Plants in Whitefish.  Hailey Moore, the Nursery Manager, has been immensely helpful in a variety of ways – from identifying native and invasive grasses to connecting me with other resources.  In the two years that we have had these sand cherries, I saw significant die-off in the spring.  The first year, I thought it might be “normal”, but I decided not to make any assumptions.  Hailey let me know that Montana State University (Schutter Lab) offers up to five free lab tests per year for Montana residents.  So, per the lab’s instructions, I sent off a healthy sample and a “diseased” sample of the sand cherry.   I also emailed pictures to the lab.

In less than a week, I had the results from Dr. Eva Grimme: "I suspect that the shrubs are affected by environmental factors like a late frost this spring.  I also found very minor browning/discoloration in the vascular system, which could indicate a fungal canker.  I recommend you check if the branches are still green underneath the bark - this means that they are still alive and may recover.  Prune out the dead branches.  Make sure to sterilize your tools between cuts.  Focus on supporting shrub vigor by providing adequate water and nutrients during the growing season."  As you can see, the pruning was dramatic, but hopefully it will improve the vigor of the shrubs (I have four of them) in the future.  I will also make a note to protect them from frost next spring!
If I was self-indulgent, I might be inclined to tell you about EVERY ONE of my plants, but this post would be as long as War and Peace!  A few of them deserve to be called out (and I will, below, but for now, I will let these mosaics speak for the plants.) 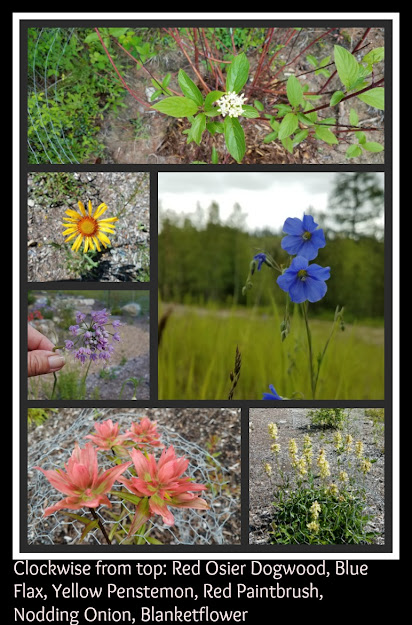 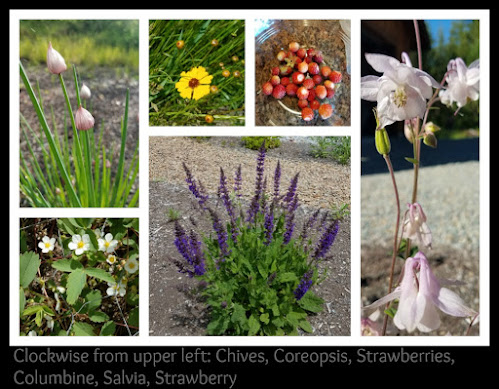 And now for the plants that deserve a special mention.  First up is aspen fleabane.  It has spawned at least 7 volunteers, one as much as 20 feet from the original plant. 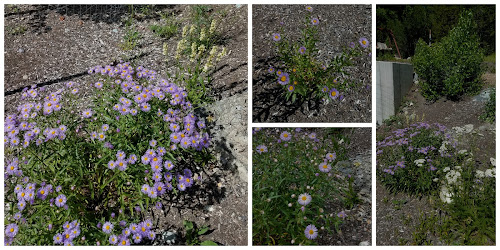 Given my upbringing in the Midwest, the maples are near and dear to me – I already am in love with their shape and can imagine the day when they tower over the house and cast plentiful shade! 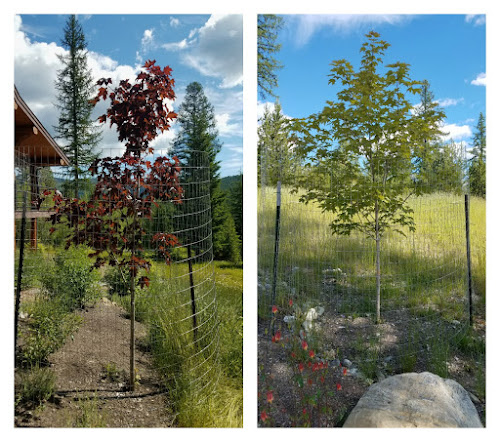 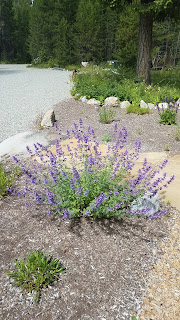 The shape of this Catmint is wonderfully symmetrical – a perfect choice on the part of our landscapers for a position next to the flagstone path that leads to the front door.

The scarlet Gilia is a fascinating flower.  When first installed, the three plants appeared as you see in the mosaic below - tall and spindly with flowers scattered along its arch.  The next year, we had many volunteers, but they never rose much above an inch tall.  And this year?  Shazam – blooms all over the place.  It turns out that this two-year cycle is normal for the plant. 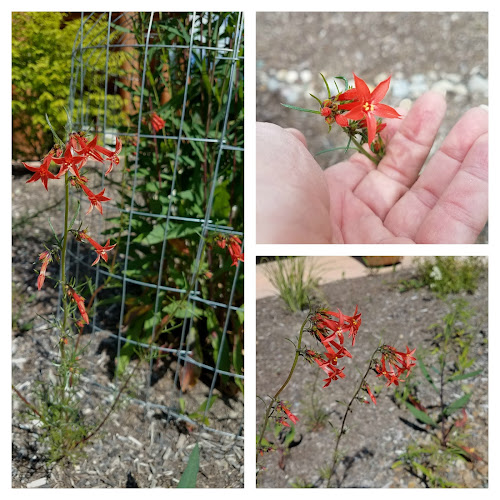 As faithful readers know, we planted wild grass/wildflower seed mix our first fall in the house.  I have been very pleased with the results – many types of grass, flax, poppies, black-eyed susans, coneflower.  And a few lupines.  One of them actually bloomed this year, which is not too bad for only its second year! 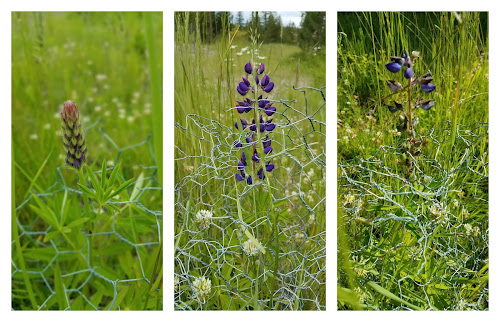 Now that my garden is really coming along, “big picture” pictures are more appealing. 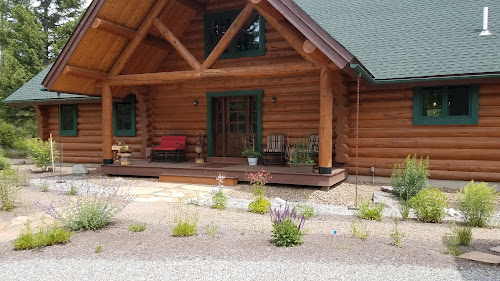 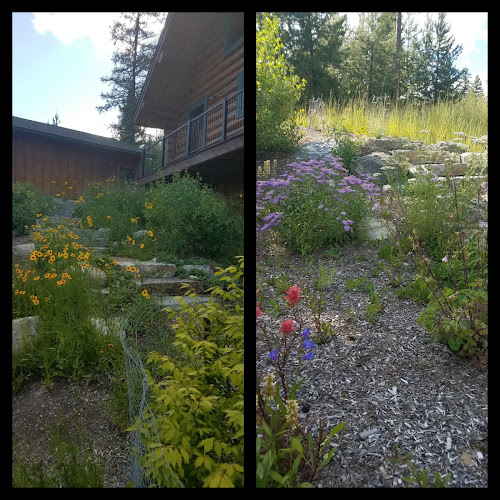 Nature continues introducing her own plants to my garden as you can see in the collage below.  I have shown you arnica in the past; this month I have been able to collect seeds and hope that will be another successful experiment next year. 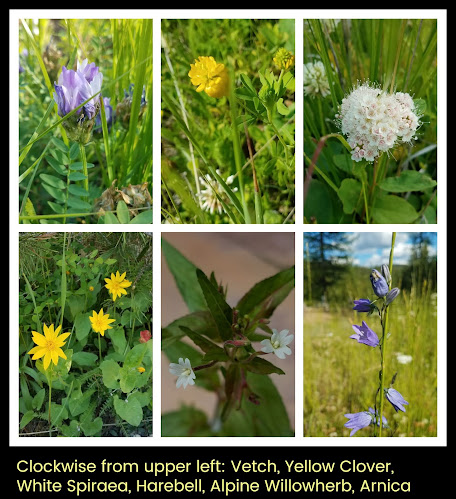 The circular bed around the Douglas Fir in front of the house has been growing so vigorously that my metal moose was getting lost in it.  So, I shifted it and the other decorative lawn art about 5 feet to the left.  Voila!
After an initial slow start, the flower pots on the deck, as well as the flower baskets on the jackleg fence, are thriving. 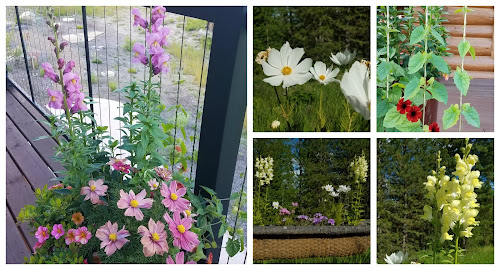 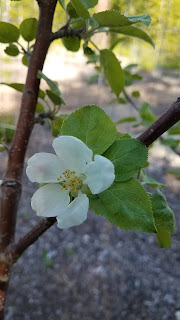 Of course, my battle with critters is ongoing, from ground squirrels to rabbits to deer.  It was intense for a week or two, including the morning I chased a bunny around the entire house while still in my pajamas!  And then suddenly, no bunny.  Dramatically reduced numbers of ground squirrels.  Maybe the badger family is having an impact!

The picture at left is the one and only apple blossom we had this spring - no fruit this year.  And don't ask me about the aphid infestation on our golden currants!

But then I wake up this morning and see this.  Every gardener has her trials, but they all fade into the background when a new bloom erupts in all its glory. 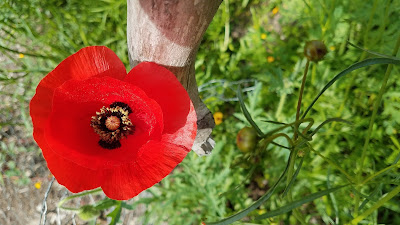 (I may be slow in commenting due to an overnight camping trip.)

Welcome to Mosaic Monday, a weekly meme where we get together to share our photo mosaics and collages.


Please include at least one photo mosaic/collage in your post.
The link will be open from 1 p.m. Sunday until 11 p.m. Monday (U.S. Mountain time).
Remember to add the link to your Mosaic Monday post and not the one to your blog.
Please link back to this post so that your readers will be able to visit and enjoy more wonderful mosaics; taking the MM blog button from my sidebar is an easy way to link back.
As host I will visit every participant and leave a comment so that you know I stopped by.
Please try and visit as many other blogs as you can, especially those that join in later, so that everyone's creativity can be appreciated fully.
Thank you for joining in today and sharing your mosaics with us.


You are invited to the Inlinkz link party!
Click here to enter
Posted by Angie at 11:19 AM