It's hard to believe we have been in Montana for 2 months - ONLY 2 months?!  We have packed in so much already, my senses tell me it's longer. I have learned a great deal about the flora and fauna of the Flathead Valley, such that my notes from our early hikes seem almost childish.  But guess what?  You are the beneficiary of my augmented knowledge - I am going to take editorial licence and ensure that my identifications are correct, even if they don't reflect the notes I took that day. OK with you? 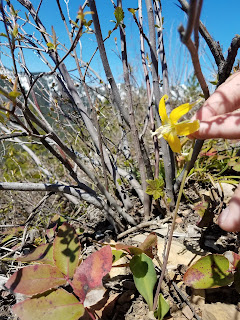 Behold the Glacier Lily (which I originally identified as a trout lily).  I still remember the flash of gold next to the trail and my sense of excitement.  I asked Number One Son (#1S) to hold its head up so that I could get a good shot of the stamens.  As I learned later, this lily is one of the first wildflowers to bloom in the spring.  It is especially known for its capability to emerge through the snow as it is melting.  So, when you see a proliferation of freshly bloomed Glacier Lilies, you know that the snow has only recently receded.  It is known by several common names, including yellow avalanche lily, glacier lily, and dogtooth fawn lily. 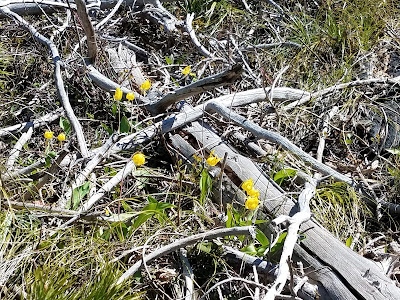 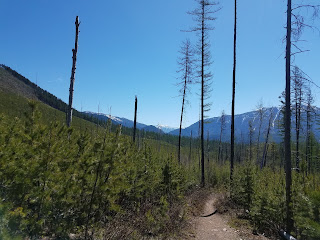 The Flathead is currently at high risk of fire due to dry conditions and an incoming weather front that brings strong winds that will fan any fires that exist or start.  The Apgar Lookout Trail is an example of the outcome of wildfires, such as the one in 1994 that cleared many of the trees from the slopes.

This saddens me, of course, but it also means that you have clear views of the mountains in all directions. 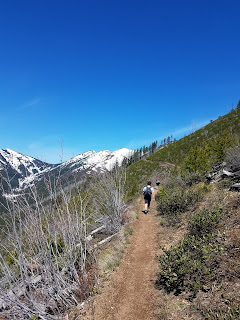 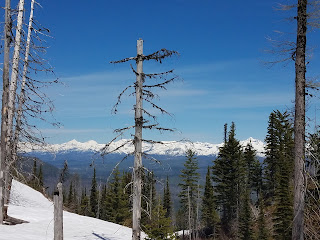 As you can see, snow was still abundant the day of the hike.  While it can be challenging to traverse, snow has its benefits.  Tracks!  Based on animal tracks (hoofprints) and scat (poop to you and me), bighorn sheep had gone before us on this trail. 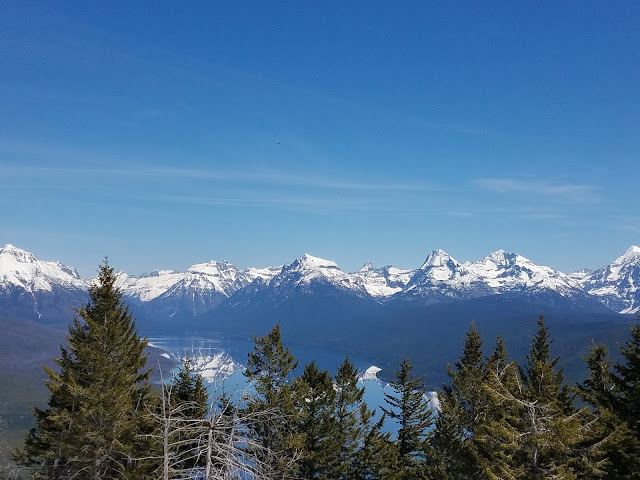 Great pictures!  Mountains are always majestic, but the snowcaps make them pop.  Apgar Lookout peers over Lake McDonald, which provided a grand mirror for the peaks at the far end of the lake. 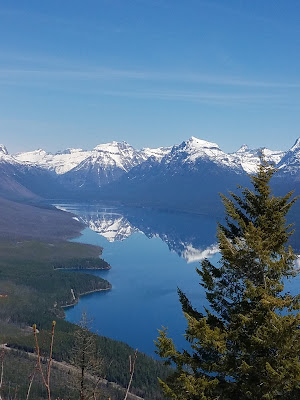 Despite the prevalence of the white stuff, the ground squirrels were out in force at the summit.  Also, a Rufous Hummingbird buzzed us during our snack break!  I was gob-smacked (British term for speechless) that it would be flying around at that altitude!!!  What could it possibly have been pollinating?

We reluctantly headed down.  In the wet areas near streams, Western Tailed Blue butterflies would leave the mud and flit around us - all my attempts to creep up on them for photos were desperate failures.  As a consolation prize, I snapped these trillium, a known spring flower from my Ohio days. 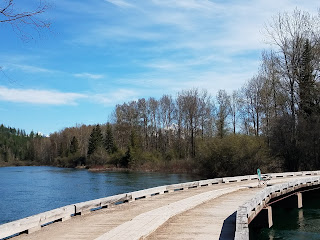 Toward the end of the hike, a bridge crosses McDonald Creek.  A lone fisherman had left his chair to seek a better vantage point.  Looking behind me, I could see the junction of the creek with the Middle Fork of the Flathead River, clearly carrying a load of silt transported by the snow as it left the slopes of the mountains upstream. 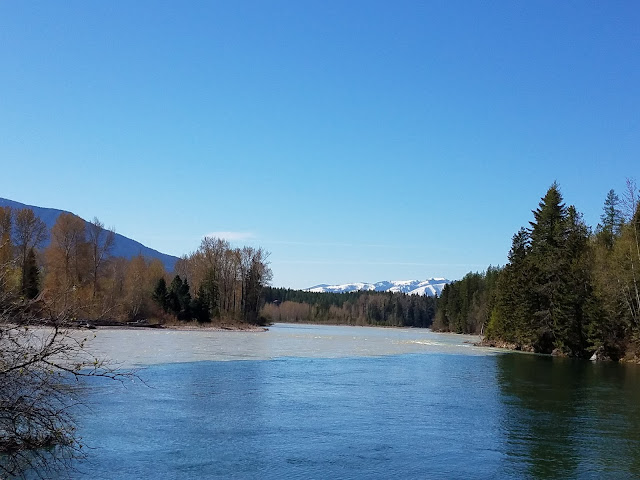 There is something about expectation that sets a boundary, isn't there?  We originally planned for a 5 mile hike; this expanded to 9 miles round trip because the road was closed 2 miles before the trailhead.  As best we could determine, it was the fault of the nesting pair of osprey - they had chosen a tree quite close to the road!  So, rather than blame the ospreys, we went for pie! 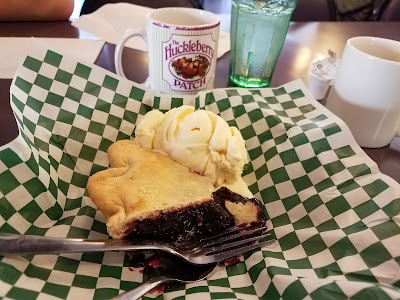 From the Huckleberry Patch website: Located nine miles from the west entrance of Glacier National Park, HUNGRY HORSE, MONTANA claims fame as the wild huckleberry capital of the West. This sweet tart wild berry grows only in moist mountain areas and cannot be commercially grown. Wild berries are not sprayed with chemicals or fertilizers. Berries are hand picked when ripe and processed without artificial colors, flavorings or corn syrup. "Vaccinium" huckleberries are blue-black or blue-reddish, depending upon soil and habitat and grows on a slender shrub 2 - 6 feet high.