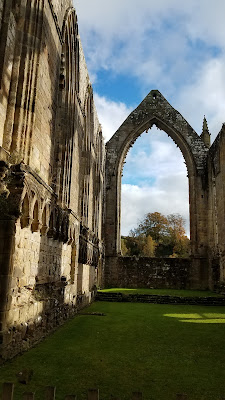 You can't spend much time in England without encountering an abbey or two, especially if you enjoy history and idyllic walks in the countryside.  On November 3, 2021, we added Bolton Abbey to our life-time list, which already included Whitby Abbey, Fountains Abbey and Easby Abbey.
Alice de Rumilly offered the Black Canons of the Order of St. Augustine the sheltered site of Bolton in 1155.  Here they thrived, despite various setbacks, until the dissolution of their Order by Henry VIII in 1539.
In the Abbey's heyday, there were 26 canons (similar to monks) and 200 lay workers.  The income required to support and improve the Abbey came from sheep farming and lead mining. 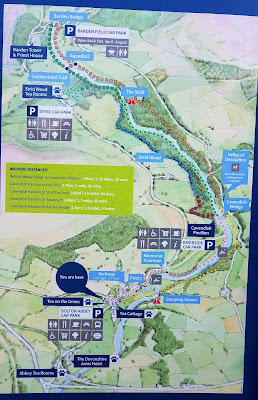 We began our visit at the Bolton Abbey Car Park, which you can see on the map at right, near the "You are Here" mark.  Upon studying the map, my enthusiasm mounted.  In addition to the Abbey, this site offered numerous walking paths, Tea Rooms and other historical features, not to mention the River Wharfe coursing among the hills.  Let's go!
In the picture below, you catch a glimpse of the Abbey in the top left of the photo.  (And have you noticed this is the second lovely day we had for touring Yorkshire?) 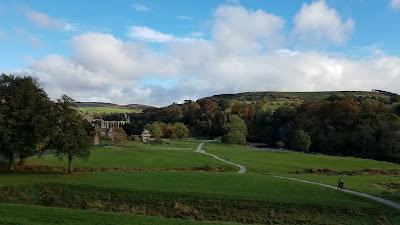 Bolton Hall (the picture below) is one of the homes of the Duke of Devonshire, a title held by members of the Cavendish family.  This branch of the family has been one of the wealthiest British aristocratic families since the 16th century. 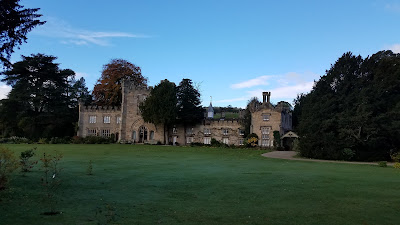 Of course, given the dissolution of the Abbey in 1539, we must rely on drawings to depict the buildings in their former glory. 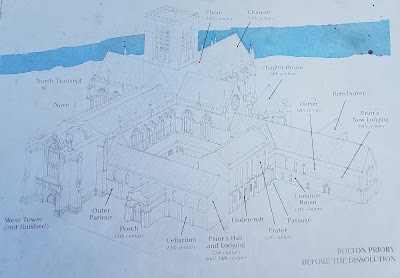 A discerning reader will note "Bolton Priory" in the lower right-hand corner of the above photo.  Is it a Priory or an Abbey?  Signage at the site referred to it both ways; as far as I can determine, it was considered an Abbey before the dissolution, and is now referred to as a Priory.  The nearby village is also called Bolton Abbey.  And below is a picture as the Priory stands today. 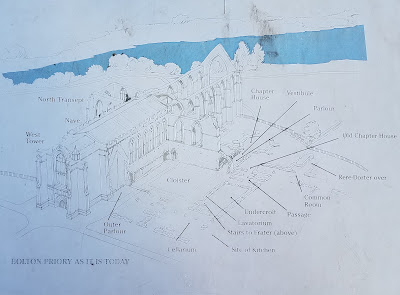 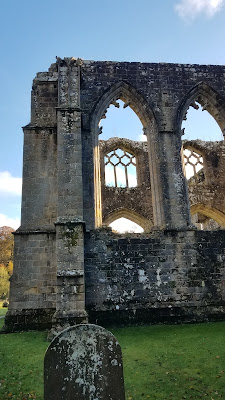 The monastic landscape we see today was part of the much larger monastic estate.  There were barns, granges, workshops and orchards, together with a mill, bakehouse, brewhouse and tannery, which would have contributed to the economic self-sufficiency of the canons.   It was a monastic life and they lived under a rule observing the 3 substantial vows of poverty, obedience and chastity.  The ordinary habit of an Augustinian canon in England was a black cassock, sleeved surplice, cloak with hood fastened only at the neck and left open in the front, and black square cap. 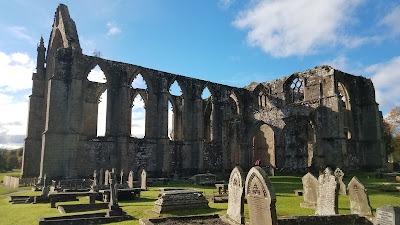 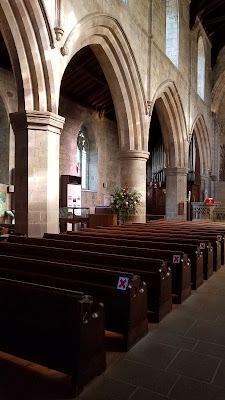 At the dissolution, the nave of the Priory (see right, and below) was allowed to continue as a parish church.  However, other roofs were stripped of valuable lead, but otherwise left intact.  This saved the cost of demolition and for a while some of the associated buildings were rented out: the Cellarium was known to have been used as a house.  As the years went by, they must have proved inconvenient and left to fall into ruin. 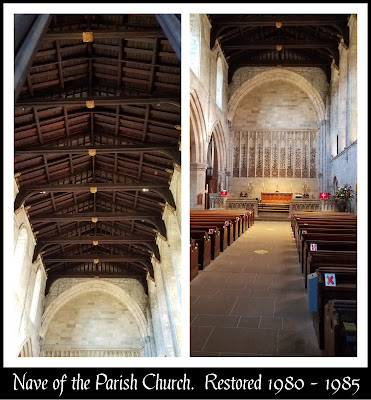 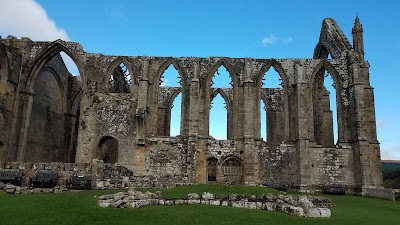 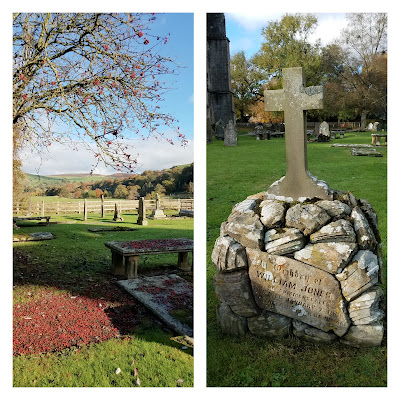 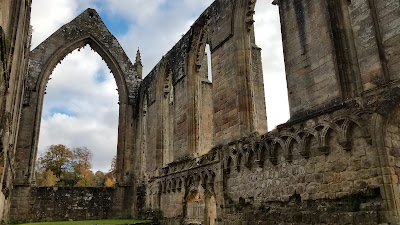 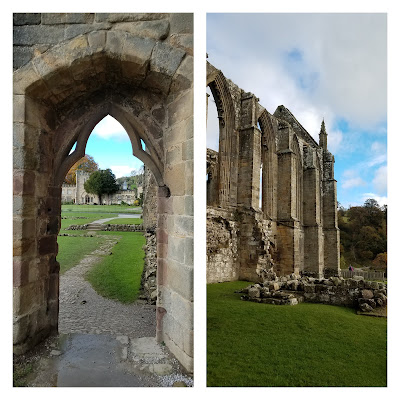 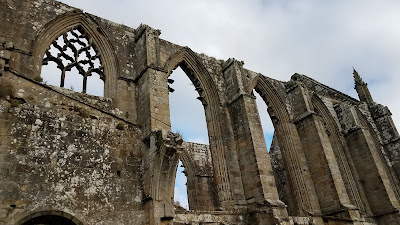 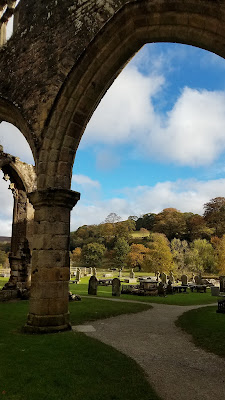 As you stroll the closely cropped grass of the site, you can almost hear the quiet whispers of the canons as they went about their daily tasks.  Rustling leaves were reminiscent of cassocks brushing the stone paths, worn down by thousands of steps over the centuries.  The wind blowing gently through the open windows carries the echoes of Gregorian chants.  It is easy to be in touch with God in such a serene and gorgeous setting.
These roses caught my eye.  I do not think they grow here naturally, but if a miracle was going to take place, I can't imagine a more appropriate location. 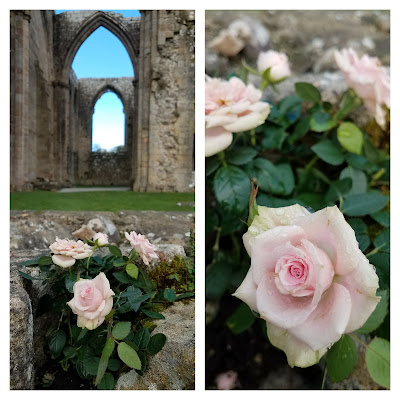 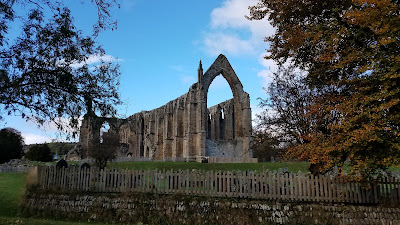 Having thoroughly explored the Abbey, we moved toward the river and the extensive walking trails.  The River Wharfe is a spate river (read = very full, flowing fast) draining water off the peat moors, hence its brown color.  Daily management by the River Keeper ensures it provides a habitat for a wide variety of birds, animals and plants, while also offering enjoyment for anglers.  (Too bad Man with Hat did not have any gear with him!)  The stepping stones you see in the river below are an old right-of-way, linking the hamlet of Storiths with the Priory. 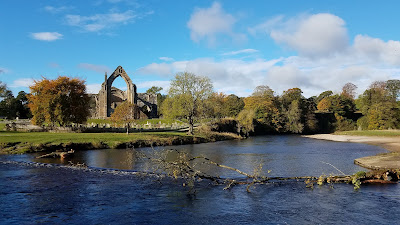 People are allowed to cross the Stepping Stones when the water level is lower; a footbridge is provided as an alternative, or for those who are a little risk averse!  We followed the path on the south side of the river, and it quickly passed into a thick wood.  The trail featured kids' activities along the way, such as slides or large tunnels to explore.  It always pleases me to witness these efforts to encourage families to get out into nature!!!  At some point, somebody decided to start putting coins into this fallen tree.  Now there must be hundreds! 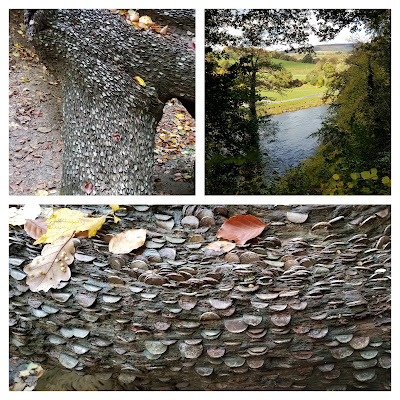 Eventually, the footpath emerged from the wood and joined the riverside. 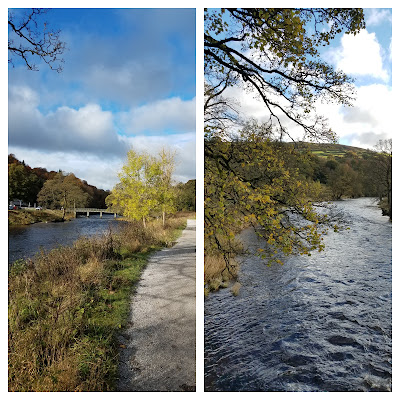 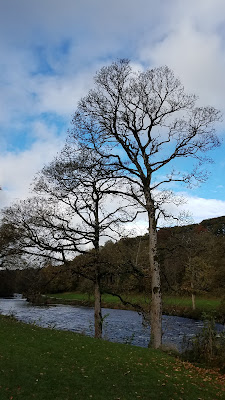 The bridge in the left-hand picture above leads to the Cavendish Pavilion, originally built in the 1890s by the 7th Duke of Devonshire as a tea room for the day visitors who arrived by train.  On an August bank holiday (read: a day on which banks are officially closed, observed as a public holiday) in the 1890s, the railway brought 40,000 visitors here.  We would have loved to walk further, but my in-laws were waiting for us back at the Priory.  So, we grabbed a coffee to go from the tea room, and reversed course along the north side of the river, which was populated by widely spaced deciduous trees and plentiful picnic areas.  I loved the look of the bare tree branches against the sky. 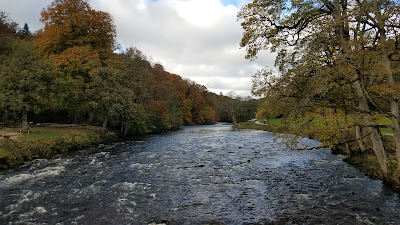 As we approached the Priory once more, the trail ascended a steep bank, allowing for a fabulous view of the ruin, nestled in the elbow of the river, with the hills beyond. 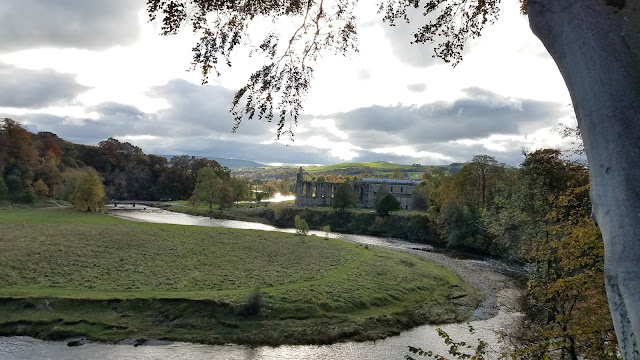 Nearby is this memorial fountain and an overlook of the cemetery. 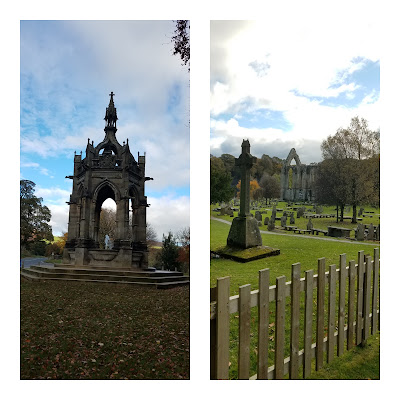 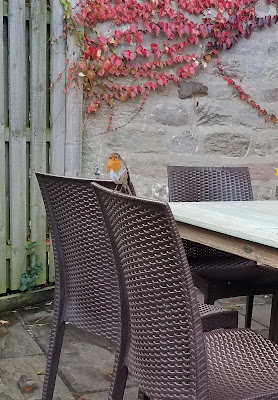 Speaking of tea rooms, by this time we were ready for a cuppa!  We chose the closest establishment, and found the inside tables crowded with like-minded folks.  Fortunately, it was warm enough outside to take advantage of the ample seating on the patio.  And we were visited by this adorable Robin. (No, we didn't feed it, although I am sure that is why it was flitting about!)  Check out the video, too!

We meandered the short distance back to the car park, and mooched about the gift shop for a bit.  Outside, this large map of Bolton Abbey offers additional historical information, and outlines other sites to visit.  Once again, this is on our list for a return adventure.  Finally, at the top of the map, the description helps to solve the naming "mystery". 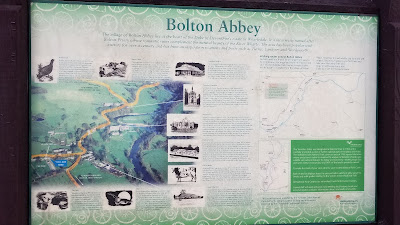 "The village of Bolton Abbey lies at the heart of the Duke of Devonshire's estate in Wharfedale.  It is incorrectly named after Bolton Priory whose romantic ruins complement the natural beauty of the River Wharfe."  So, there you go - the village is the Abbey and the ruins are the Priory!!!
***********************************
Also linking to Wandering Camera this week.  Check out these other photo and art/creative themed posts!  Wandering Camera – Yosemite Birthday Surprise – InkTorrents Graphics