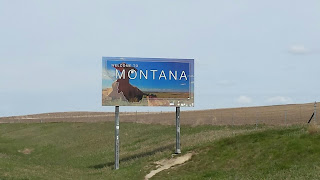 Twenty minutes after leaving Buffalo Gap, we entered Montana. WE MADE IT!  And then, for the next four hours, we had open roads. 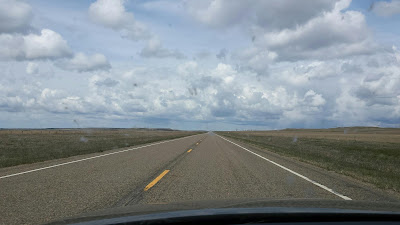 Spousal Unit took advantage of this opportunity to put the Audi TTS through its paces - 125 mph at one point.  I would love to know what his co-pilot (Tom the parakeet) was thinking as they sped through the vast farms and ranches.

At points, rain clouds could be seen in the distance, with the trailing dark arms that indicated precipitation.  I was grateful for the occasional rain shower to rinse off some of the dust from the ranch roads.

In one field, I saw a group of pronghorn grazing with the cattle.  Pronghorn are one of the only remaining large mammals to roam the Great Plains.  Running at speeds of upwards of 60 miles per hour, they are North America's fastest land mammal.  Pheasant seem to have an obsession with the road - in addition to several that ran across the highway in front of me, there were an equal number squished on the tarmac. 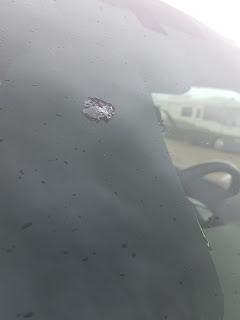 The pheasant were not the only casualties this trip - about an hour after starting out today, an oncoming semi tossed a large rock at my windshield and incurred a large divot.  Our general contractor warned us this is a common occurrence in Montana, so now I can say I have THAT out of the way!

In general, everything is bigger in Montana - farming equipment, snow plow blades, the size of the parks.  The American Prairie Reserve in mid-Montana is bigger than Rhode Island.

Overnight we are in Malta, a town nestled along the Milk River (think chocolate milk), the railroad that runs from Chicago to Whitefish and beyond, and Highway 2, which will take us to Whitefish tomorrow. 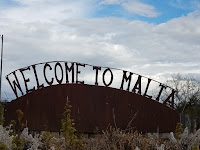 Our quick tour took us to Trafton Park, featuring a short trail along the Milk River.  We soon discovered the view below, and engaged in brainstorming about the cause: Art Installation? Junkyard that fell into the river during a flood?  A creative method by the homeowner to retain the shore when the waters get high?  In talking later with a local, we were none the wiser: she said it has been that way as long as she can remember. 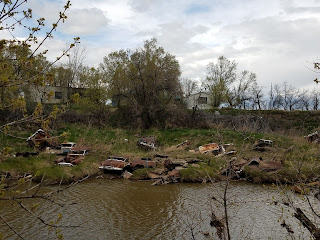 We sampled the cuisine at the Great Northern Hotel, Lounge and Steakhouse.  (It is the only hotel in town that has inside parking, which is a significant advantage in the winter.)  I recommend the Mint Chocolate Chip Pie. 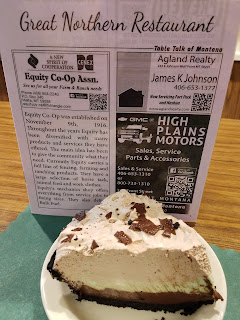 So, tomorrow, we will finish our emigration, and we are very excited.  To celebrate, we cracked open a bottle of Honey Jack, which we have been saving since last Memorial Day.  This wasn't just any bottle - it is one that was given to us by dear friends at that time, with a note that said "Can only be opened in the state of Montana".  Guys, it's open now! 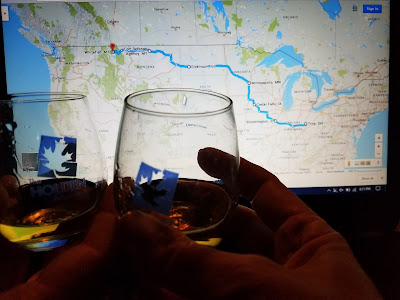