Dreams fulfilled.  Bighorn sheep and a bear.  Free entry into Parks Canada.   Staggering vistas.  Time with my Mom and my eldest sister.  In so many ways, our Canada road trip in August 2017 had already delivered (Day 1 post, Day 2 post, Day 3 post).  What could the final day bring? 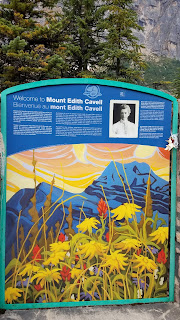 As mentioned in the Day 2 post, our final day included deliberately re-tracing part of our outbound route - the Icefields Parkway.  We held back a few stopping points for the return journey, starting with Mt. Edith Cavell.  The Cavell area offers fragrant sub-alpine forest, new growth where a glacier recently retreated from the valley, flowery alpine meadows and spectacular views of Mt. Edith Cavell and the Angel Glacier. 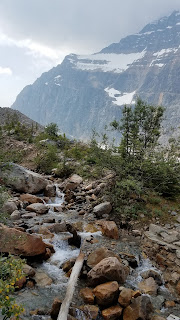 Edith Louise Cavell (1865-1915) was a British nurse during World War I.  In 1907, she went to Brussels as a nurse, but by 1914 was put in charge of a unit whose main purpose was to help soldiers trapped behind enemy lines rejoin their units.  To the German army, this was treason, and she was executed by firing squad.  Today she is remembered as a heroine, and to some a martyr.  In 1916, the snow-capped face of this peak was renamed in her honor. In 2017, access to the Cavell area was by permit only due to construction at the parking area; only 180 vehicle permits were issued each day at staggered times between 8.30 a.m. and 8 p.m.

The "Path of the Glacier" Trail takes you toward the great north face of Mt. Edith Cavell, across a rocky landscape recently covered with glacial ice.

At the end of the trail, you get the best look at Angel Glacier, which forms in a large cirque, or bowl, largely hidden from view.  Very slowly, it flows out of the cirque toward you.  Some ice breaks over the vertical cliffs, forming the angel's 130-foot thick wings; the remainder plunges down a steep gully, forming the body.  This constant movement sometimes causes an ice avalanche, which makes it dangerous to climb beneath this hanging glacier.

In 2012 an ice avalanche fell into Cavell Pond, upstream from the end of the trail, displacing huge volumes of water.  The resulting 'flash' flood carried ice, rock and debris downstream, washing out the trail, deeply eroding the stream bed and littering the area with rocks.

Nevertheless, nature has a way of making a come-back; new growth of trees and flowers are reclaiming the landscape that was washed clean just five years ago.  We were so grateful that we were able to secure one of the daily permits to visit this unique mountain. 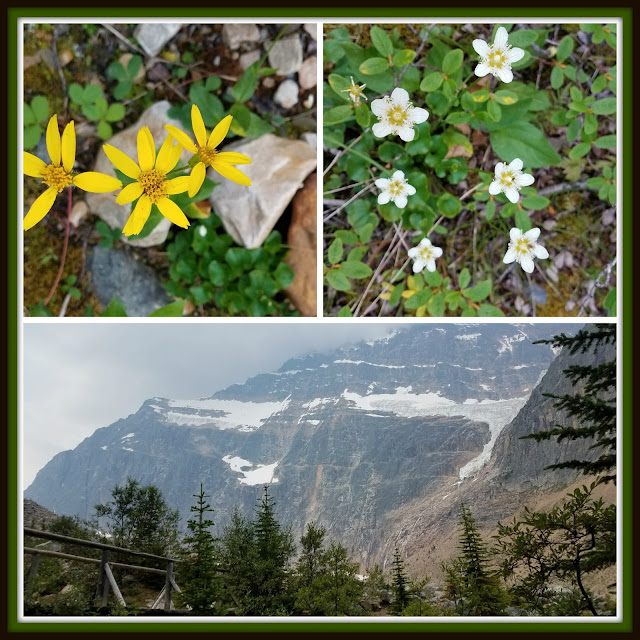 Our next stop was a layby offering an inspiring outlook on Stutfield Glacier (you see, the problem is not finding a glacier, it is trying to decide which ones are worthy of a stop for a photograph).  The smoke from forest fires still hung in the air, especially as we drove south.  So, this picture is not as crisp as I would like ... but it is a reminder of the true conditions during our visit.

On the road again, the Parkway soon whisked us to the Athabasca Glacier, one of the six principal 'toes' of the Columbia Icefield.  Easily accessible, it is the most visited glacier in North America. 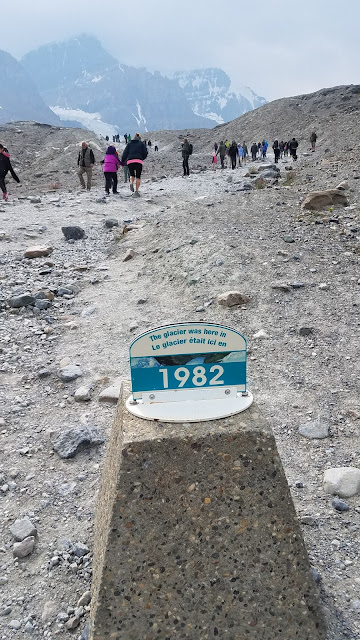 The glacier currently recedes at a rate of almost 16 feet per year and has receded about 1 mile and lost over half of its volume in the last 125 years.

At times, you are walking on glacially smoothed limestone surfaces that were under the ice in the 1950s.

The leading edge of the glacier is within easy walking distance from the parking lot; however, travel onto the glacier is not recommended unless properly equipped.  Hidden crevasses have led to the deaths of unprepared tourists.

The glacier is approximately 3.7 miles long, covers an area of 2.3 square miles, and is measured between 300 - 980 feet thick.  In the area abandoned by the glacier, many people have built rock cairns.  All in all, it was a stark, barren landscape that I found a bit depressing. 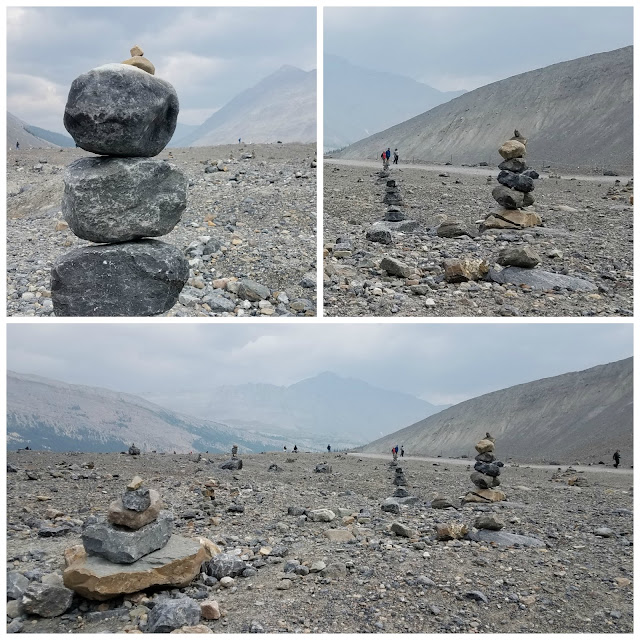 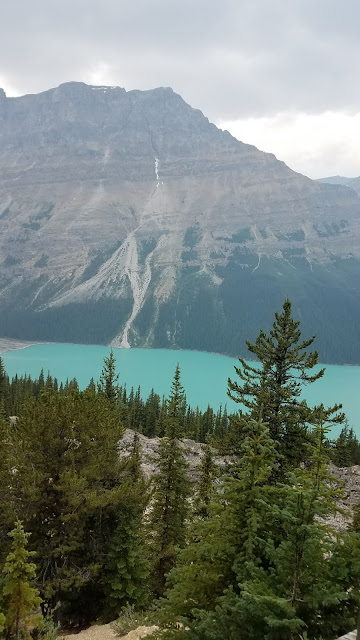 So, time to move on.  Peyto Lake is a glacier-fed lake just west of the Parkway.  It was named for Bill Peyto, an early trail guide and trapper in the Banff area.

During the summer, significant amounts of glacial rock flour flow into the lake, and these suspended rock particles give the lake a bright, turquoise color. 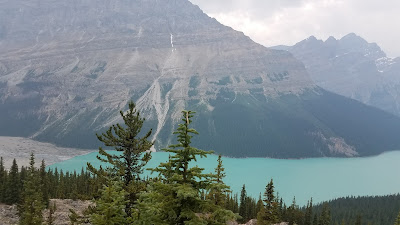 Shortly after Peyto Lake, we passed the location on the Parkway where we had spotted the black bear on Day 2.  Since I have now learned the technique for loading videos, here is footage of the bear from that day.  It represents coming full circle, returning home ... with a carload of new memories that will last a lifetime.

Linking to
All Seasons