Mosaic Monday #153: The Village of Tyuonyi 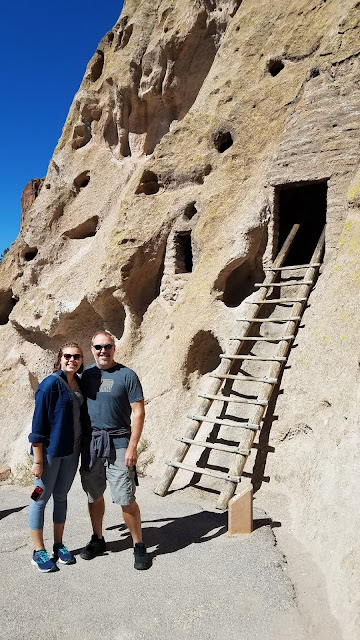 For many visitors to New Mexico, the artifacts of the Ancestral Pueblo people inspire imagination, and perhaps none more so than the remnants of cliff dwellings found throughout the Southwest.  On our second day in Santa Fe, we toured Bandelier National Monument, named for the self-taught anthropologist and historian Adolph F.A. Bandelier.  Long before he first viewed ancestral homes in Frijoles Canyon in 1880, the Pueblo people had thrived among the sheer cliffs and year-round stream, constructing a village and utilizing distinctive cave-room architecture.
They were farmers who grew maize (corn), beans and squash.  They supplemented their diet with native plants and by hunting deer, rabbits, other mammals and birds.
As we looked down into the valley from some of the cliff dwellings, we saw several deer grazing near the ruins of the village of Tyuonyi (QU-weh-nee). 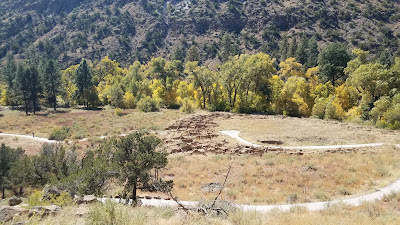 Archeological surveys show at least 3,000 sites in Bandelier, but not all were inhabited at the same time.  For generations these people lived in small, scattered settlements of perhaps one or two families each.  As the population grew, people began coming together in larger groups, and, by the mid-1200s, villages often included as many as 40 rooms.  In the following 250 years, fewer and larger villages were established, with some exceeding 400 rooms.  In Bandelier, the villages of Tyuonyi and Tsankawi (SAN-kuh-wee) exemplify this period. 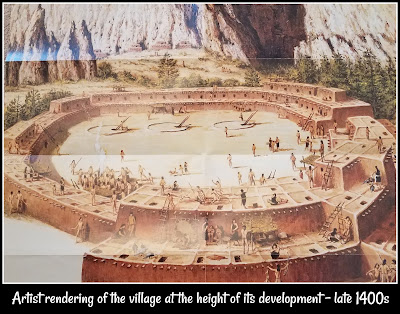 If you look closely at the rendering above, you will notice dwellings nestled snugly against the cliff wall.  Today, you can still see the remains of these homes.  Long House is an 800-foot stretch of adjoining, multi-storied stone homes with hand-carved caves (cavates) as back rooms. 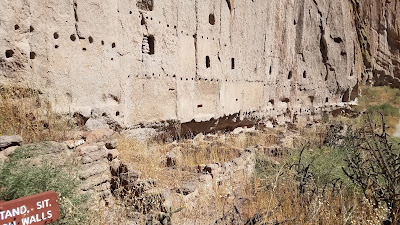 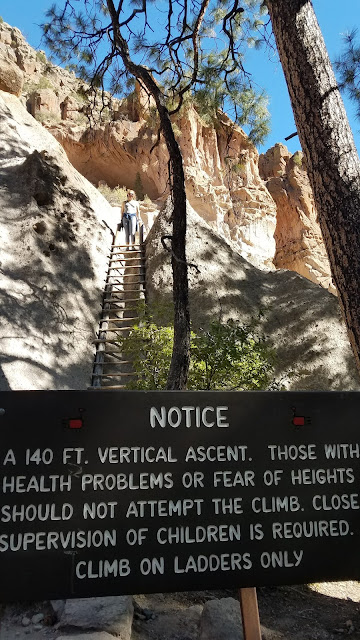 I was fascinated by the ladders located throughout the site, which gain visitors access to the caves, many of them featuring carved-out cooking spaces and benches.  But the most amazing dwelling came at the end of the trail.  140 feet above the floor of Frijoles Canyon, the Alcove House was once home to approximately 25 Ancestral Pueblo people.   Inside the alcove today are the viga holes (where the beams were inserted), niches of former homes and a reconstructed kiva. 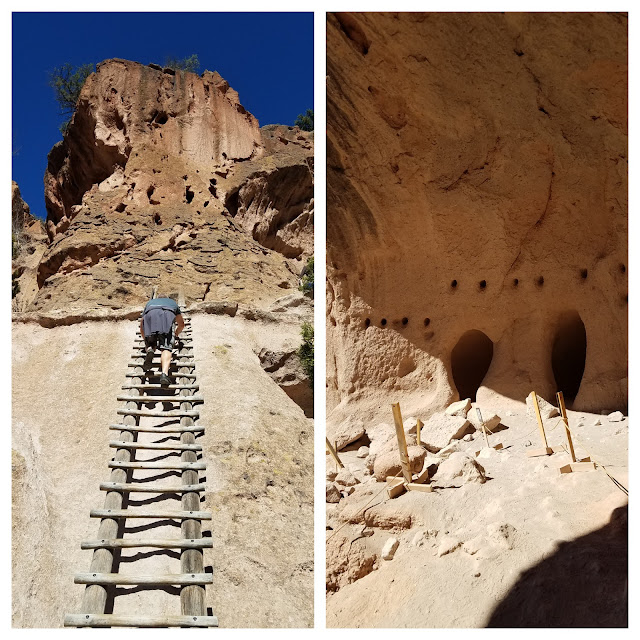 Four separate ladders were required to ascend the 140 feet.  You would want to be sure you had done everything you needed to before retiring for the night, lest you have to navigate those ladders by starlight!!! 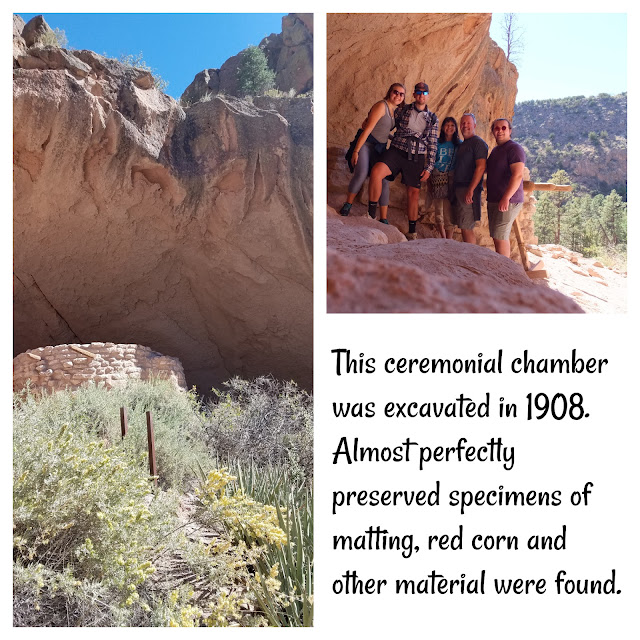 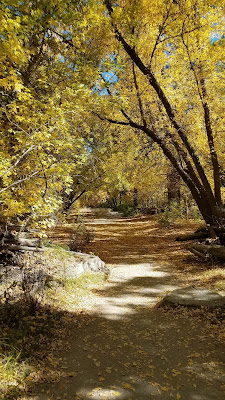 No translatable records existed before the Spanish colonized New Mexico, but in their oral traditions today, Pueblo people remember the places where their ancestors lived.  The Pueblos of Cochiti, San Felipe, Santo Domingo, San Ildefonso, Santa Clara and Zuni have declared their strong ties to Bandelier.  Representatives from these Pueblos work closely with park staff to make decisions affecting their ancestral homelands.  "Spiritually, our ancestors still live here at Bandelier.  You see reminders of their presence here - their homes, their kivas, and their petroglyphs.  As you walk in their footsteps, value the earth beneath you and show everything the same respect we do when we re-visit this sacred place."  Affiliated Pueblo Committee 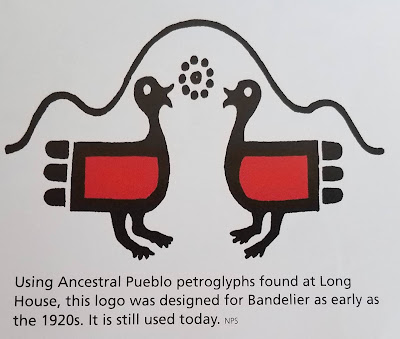 While I had hoped to find a souvenir with the logo, the gift shop did not carry many such items apart from this pin that #1 Son added to his pin collection.  I opted for these spectacular ceramic coasters.  I will remember this place with a sense of wonderment and awe. 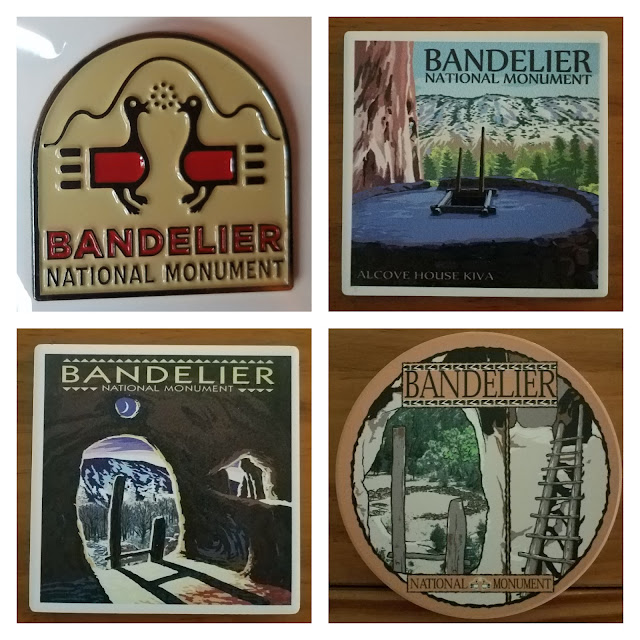